UK figuring out how to close out games 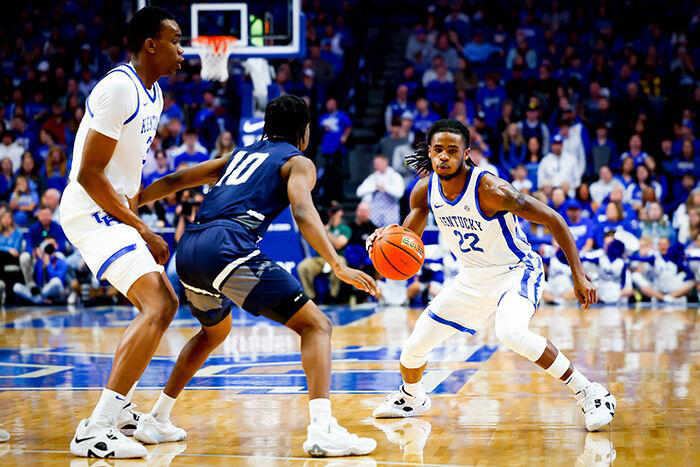 Kentucky finally closed a game in its 73-69 win over Michigan in the Basketball Hall of Fame Showcase last weekend in London, England.

It’s something the Wildcats had learned from in losses to Michigan State and Gonzaga.

“I’d say the way we closed that game was pretty different for us,” Wallace said Friday. “Something that we were focusing on in the week before the game. So going out there and executing late in the game, being gritty late in the game, and just coming out with that win.”

Kentucky returns from a five-day break and will take on Yale at 1 p.m. Saturday at Rupp Arena and Wallace is starting to come into his own as the freshman guard gains more experience. He made a clutch 3-pointer with 1:08 remaining in the win over the Wolverines.

“I was just confident when I shot it,” Wallace said. “I knew my teammates needed it. It was a shot I had to take, so I took that shot.”

Wallace has been one of the team’s catalysts on the defensive end of the floor and is averaging 2.6 steals per game. However, he’s struggled at the free-throw line and has made just six free throws on 12 attempts this season. Wallace was 2-4 against Michigan State and missed his lone two attempts against Michigan.

“Free throws have been the same ever since (I’ve been playing),” Wallace said. “I don’t know what’s going on right now. But I’m going to lock in and to get it right. Can’t be missing that many free throws. I’m not used to missing this many free throws myself. So it’s not something that I’m gonna get used to, or I want everybody else to get used to. So just practicing on it, making sure I’m still sharp on it and next game, I plan on not missing free throws.”

Wallace added he’s working on getting improving at the charity stripe and the Wildcats have changed their technique.

“We’re starting to shoot one and ones instead of 10 free throws in a row,” Wallace said. “One and ones are what I’ve been struggling with at the line. So going up there with confidence, knowing that I do it in practice all the time, I should be able to do it in the game. So we shoot three one and one’s and you got to make them all six in a row, basically. But just getting that mental practice and repetition. Hopefully, it’ll help.”