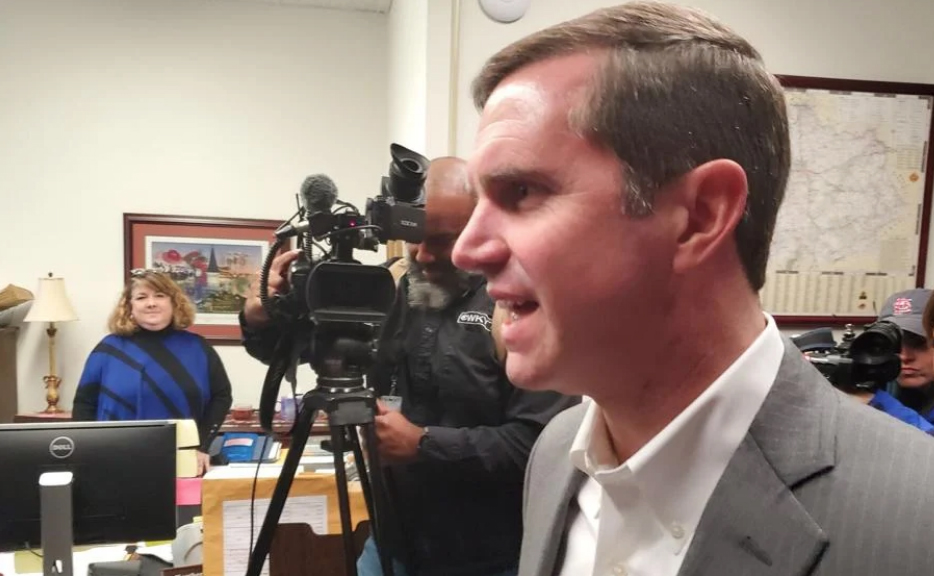 Gov. Andy Beshear will be running for a second term as governor. Kentucky Today photo by Tom Latek

Gov. Andy Beshear officially filed his paperwork to seek the Democratic nomination for a second term in office on Monday at the Secretary of State’s office in the Capitol.

“Lt. Gov. Jacqueline Coleman and I remain as dedicated as we were on day one to improving the lives of Kentucky lives,” he told reporters after filing the papers with Secretary of State Michael Adams. “We’re going to fight for the very best education for our children, which means fighting both for our kids, and for our educators. You’re going to see us continuing to push, including in this upcoming session of the General Assembly, to address our teacher shortage, which means raises that we as a state should fund, especially given that we have the largest budget surplus our state’s history.”

He noted that Kentucky has been through a lot during his first term.

“We’ve been through a pandemic that has taken over 17,000 Kentucky lives. We’ve been through the worst tornado disaster and flooding disaster we’ve ever seen. But I think we’re going to be remembered for our perseverance. For how Kentuckians pulled up in people’s driveways they’ve never met, as asked, ‘How can I help?’  About how we’ve responded and how going to rebuild each and every life.”

Beshear also touted some of his administration’s economic development initiatives, such as the two BlueOval SK battery plants in Hardin County, which he says will make Kentucky the Electric Vehicle battery manufacturing capital of the nation. “Our goal is that every generation of Kentuckians that follow us has more opportunities, because I want Will and Lila and every Kentucky child to be able to chase every single dream they’ve ever had right here in Kentucky.”

He also thanked his family for their support. “I have the best family that anybody could ask for an understanding and incredibly supportive wife and first lady. Every day I get to come home to Will and Lila and Britainy, and I can’t tell you what that means to me personally.”

When asked if he minded loaning his dad out for another four years to Kentuckians, Will Beshear grinned and replied, “I guess if we have to.”

Among those who accompanied the governor while he filed his papers were his father Steve, a two-term governor; his mother, former first lady Jane Beshear; and Coleman, who Beshear said would remain on his ticket when running mates need to be announced.