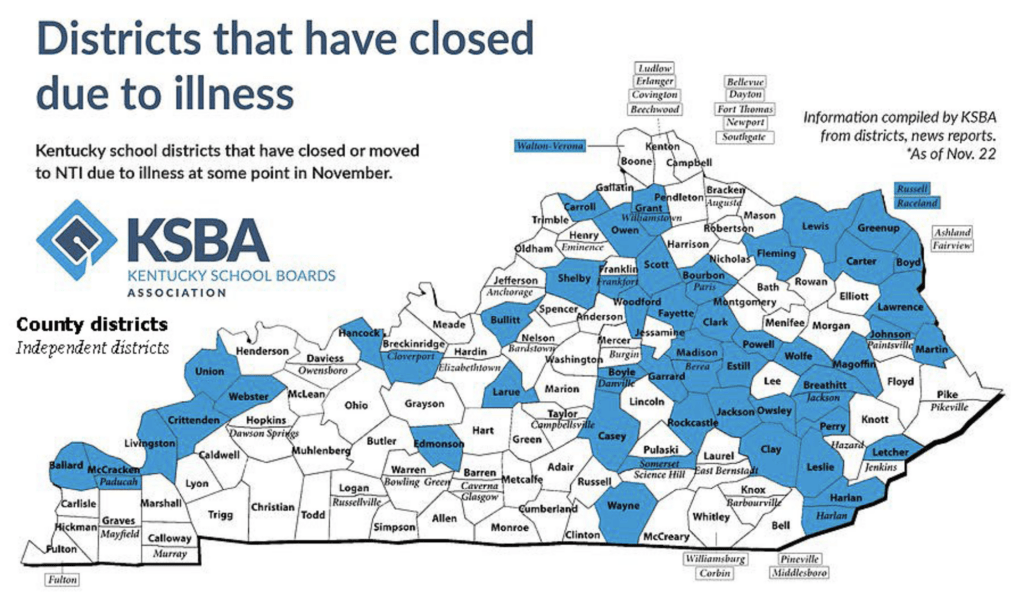 Schools in Kentucky and across the nation have been hit hard by a slew of respiratory viruses, and some parents are sending their children to school sick or sending them back to school while still infected.

They cite an inability to take more time off work, concern about their children missing in-class instruction and a weariness from dealing with the pandemic, Alex Janin reports for the Wall Street Journal.

In a typical year, Jackie Follansbee, a nurse in the Yakima School District in Yakima County, Washington, would send two to three children a week back home for returning to school sick, she told Janin. Now, it’s two to three “repeat offenders” a day, she says.

Respiratory illness has been so bad in Kentucky that so far in November, 58 Kentucky school districts have closed or used non-traditional instruction days due to illness, affecting more than 186,500 students, according to the Kentucky School Boards Association.

The Pike County Board of Education has amended its attendance policy to increase the number of parent notes that can be used for excused absences from school from five to 10, Kristi Strouth reports for the Appalachian News-Express. Students will continue to be allowed an unlimited doctor’s notes to excuse their absences.

Janin reports that schools across the country are sending notes to parents urging them to not send their children back to school until their child is fever-free for 24 hours without medication and symptoms are improving. And in some cases, nurses are calling families to remind them that symptoms of viral illnesses can last for a week or more.

In addition to an influx of respiratory syncytial virus, or RSV, Covid-19, and the common cold, Kentucky’s latest influenza report shows that most of the 6,061 confirmed flu cases this year have been in children under the age of 10, followed by people between the ages of 11 and 20.

RSV is a common respiratory virus that usually causes mild, cold-like symptoms. And while most people recover in a week or two, it can be serious for infants and older adults.

As of Nov. 19, about 16% of PCR tests for RSV in the U.S. were positive, more than double the 7.5% at the same time last year, according to voluntary lab reports to the Centers for Disease Control and Prevention.

As of the first week of November this year, The Wall Street Journal reports, U.S. children under the age of 18 were hospitalized for flu at the highest rate since 2009, according to CDC data.

Increased infection and the need for school-aged children to stay home until they are well is also affecting workplaces.

“A new round of viral infections — flu, RSV, covid-19 and the common cold — is colliding with staffing shortages at schools and day-care centers to create unprecedented challenges for parents and teachers,” Abha Bhattarai reports for The Washington Post. “More than 100,000 Americans missed work last month because of child-care problems, an all-time high that’s surprisingly even greater than during the height of the pandemic, according to new data from the Bureau of Labor Statistics.”

Tried and true public-health measures help to decrease the spread of all of these viruses, including avoiding close contact with others when you are sick, covering your nose and mount when you cough or sneeze, keeping your hands washed and staying  home when you are sick and don’t have fever for 24 hours without medication.