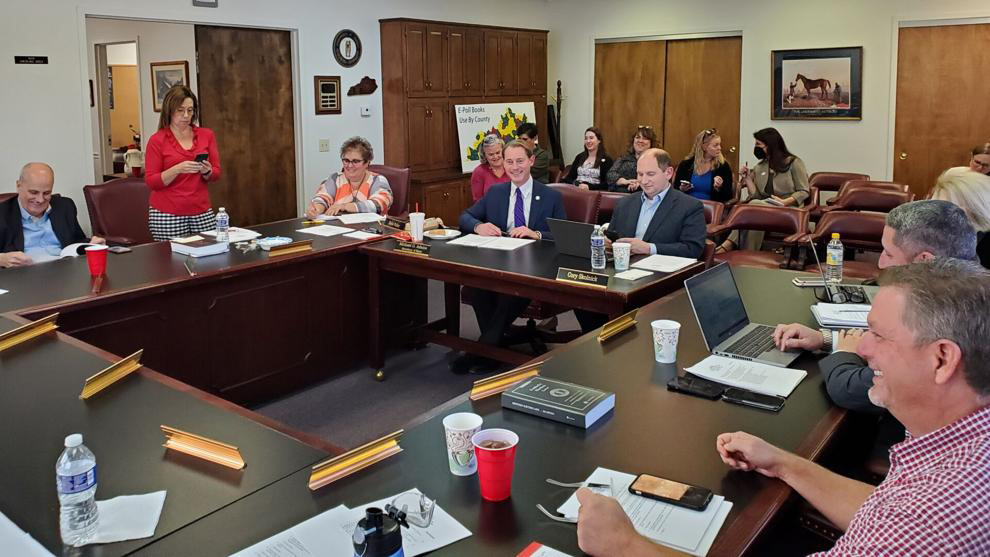 Secretary of State Michael Adams (center) presides over the State Board of Elections, which was in session while the polls were open. Kentucky Today photo by Tom Latek

Adams says many areas experienced shorter lines on Election Day due to early voting. “We had over 250,000 Kentuckians come out and vote last Thursday, Friday, and Saturday. The thing that was remarkable to me and was very encouraging was an almost even match of Republicans and Democrats that came out.”

He said how people vote, be it early, by mail, or on Election Day itself, has been politicized. “People say you vote this way if you’re a Republican, if you’re a Democrat you vote by mail. It’s all nonsense. Just do whatever is convenient for you.”

The State Board of Elections, of which Adams serves as chair, kept an eye on proceedings while the polls were open on Tuesday, and was ready to act if needed.

Attorney General Daniel Cameron reminded Kentuckians that suspected election law violations and voting irregularities should be reported to the Attorney General’s Election Fraud Hotline, by calling 800-328-VOTE, even after the election is completed.

“Tips from Kentuckians play a vital role in our efforts to investigate and prosecute criminal violations of election law,” he said. “Our office is committed to protecting the integrity of the 2022 general election, and we encourage anyone who suspects election fraud to report it immediately.”

Tips submitted to the hotline will be reviewed by prosecutors and any complaints that contain allegations of election fraud will be referred to the Attorney General’s Department of Criminal Investigations. Examples of election fraud include campaign violations, electioneering, bribery, poll disruption, and voter or election worker intimidation.