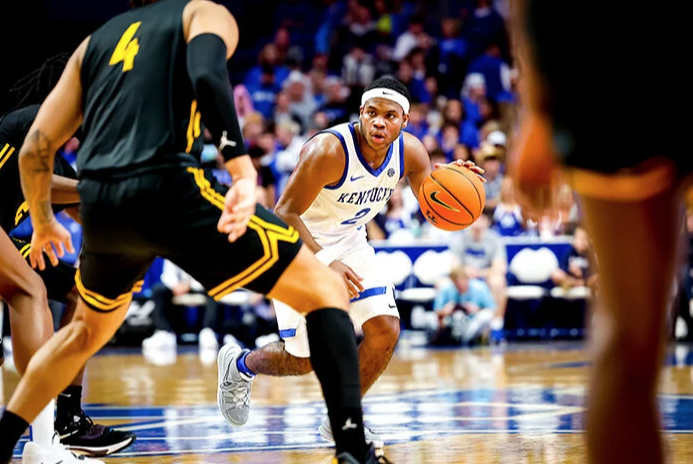 CJ Fredrick scored 15 points to lead No. 4 Kentucky to a 56-38 win over Missouri Western State in an exhibition game Sunday night at Rupp Arena.

It marked the fewest points scored by the Wildcats in an exhibition game since a 74-28 win over Transylvania on Nov. 5, 2012. Despite the lack of offensive production, Kentucky coach John Calipari said it was a valuable learning experience.

“This was good for us,” he said. “Man, did they play hard (and) did they compete. … it’s good to play a team to have done what they did to us. … give them credit. They held a pretty good team to 56 points and were trying to play fast. They played us physical and you would think, at one point, they would go away. They didn’t, they played until the (final) horn. They just kept coming.”

It was the timely shooting of Fredrick that provided some separation. Making his first appearance at Rupp since leading Covington Catholic to a state title in 2018, Fredrick hit four of the Wildcats’ seven shots from 3-point range and missed just three shots on eight attempts from the floor.

“It felt awesome — not playing in a year and a half, I put a lot of hard work into this moment,” Fredrick said. “Just being able to go out there and compete again … it was awesome.”

Calipari praised Fredrick and his veteran leadership, which provided a lift for the Wildcats.

“It’s nice to have older guys that really know what they’re doing out there,” Calipari said. “He’s special.”

Kentucky guard Sahvir Wheeler suffered a right leg injury after making a hard fall to the floor with 12:45 remaining. Wheeler finished with four points, two rebounds and one assist.

“Hopefully, Sahvir will be OK,” said Calipari, who offered no immediate updates following the contest, but added it was the same knee he tweaked prior to the Blue-White game in Pikeville a week ago. “He had to be out a couple of days of practice, probably a week (the last time).”

Kentucky junior forward Oscar Tshiebwe missed the exhibition opener and is still recovering from minor knee surgery he had earlier this month. The Wildcats collected 35 rebounds, but were clearly missing Tshiebwe in the post, especially on the offensive end. The Griffons had 36 boards, including 26 on offense.

Former Kentucky guard Jon Hood, who played for five seasons with the Wildcats and was part of the school’s national championship team in 2012, is in his second season as an assistant coach with the Griffons.

Missouri Western State head coach Will Martin served as a student manager at Kentucky and was on the staff that went to made three Elite Eight appearances and was the top manager during the 2011-12.

“The players loved him,” Calipari said. “We all appreciated him. What he did here and the mark he left. On top of that, he’s a heck of a coach.”