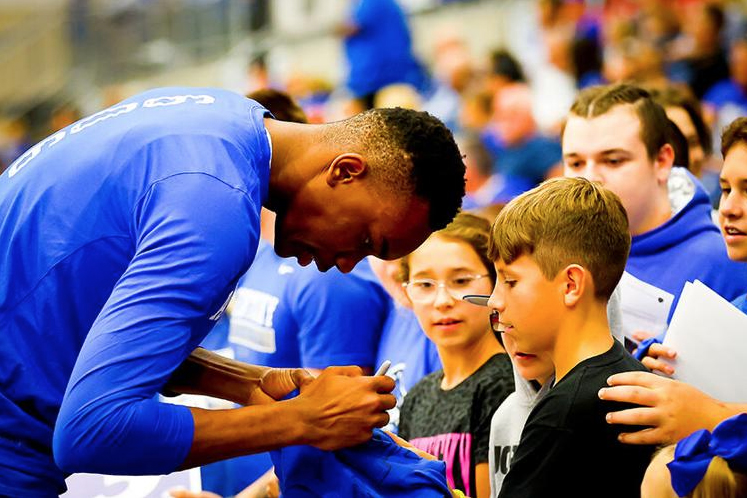 It’s been widely known that Big Blue Nation stretches from Pikeville to Paducah.

They showed up in full force at Appalachian Wireless Arena in Pikeville on Saturday night for Kentucky’s annual Blue-White game. In the scrimmage, Antonio Reeves scored 27 points and Adou Thiero added 21 to lead the Blue squad to a 70-67 win over the White team.

The scrimmage benefited victims of the deadly eastern Kentucky flooding in July that impacted the entire region. The Wildcats presented Kentucky Gov. Andy Beshear with a check totaling $162,450 to benefit flood victims and their families.

“It was a great day giving back and it was such a great day, playing in front of all these fans,” Thiero said. “It was just a great experience, seeing those warm smiles and everything, it was a sight to see.”

Standout senior Oscar Tshiebwe, Sahvir Wheeler and Lance Ware didn’t play in the scrimmage because of injuries. Instead of a full-fledged scrimmage, the Wildcats played for one full half and parts of a second half.

Most of those in attendance rarely get an opportunity to witness the Wildcats in person, including Arlie Jackson, 76, who attended the game with his wife Sarah and 9-year-old grandson Riley Jackson of Floyd County. Jackson said his sister-in-law purchased tickets online for the annual scrimmage.

“I used to follow them (all the time) and when I was in Vietnam,” he said. “Dan Issel was one of my favorite players.”

The last time Jackson saw the Wildcats in person was 10 years ago when he snagged tickets to Big Blue Madness but was glad, he received another opportunity to see the team in person.

“It’s a good opportunity to see the team,” he said. “My wife and grandson were more excited than I was. My grandson’s favorite player is Oscar Tshiebwe.”

During the trek to Pikeville, the team made a stop in Floyd County at Jenny Wiley State Park to deliver winter clothing to needy families in the region.

“It’s great that we came out here,” freshman Casen Wallace said. “We like doing community service and giving back to the community is part of what we do (as a team). Anybody we can help, we’re there. We came out here and gave them a game.”