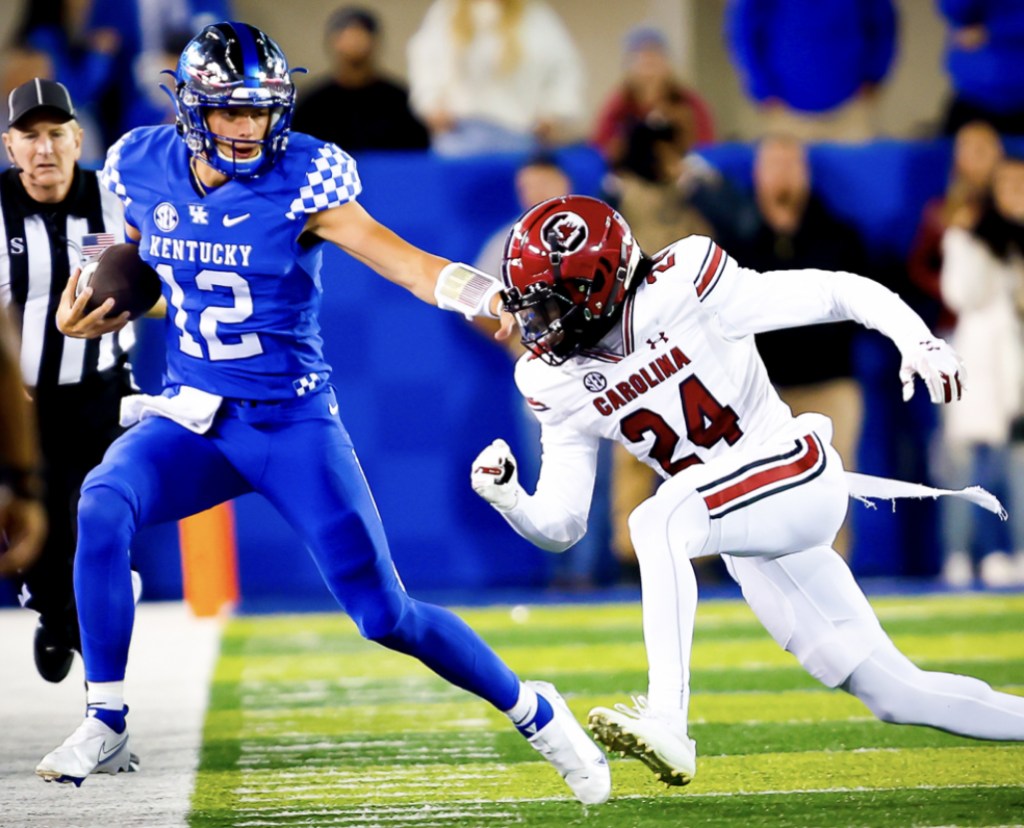 Kaiya Sheron (12) made his debut for Kentucky in a 24-14 setback Saturday night at Kroger Field. Kentucky Today photo by Les Nicholson

Kentucky faced adversity long before kickoff at Kroger Field Saturday night and it’s a good thing the suddenly struggling Wildcats weren’t playing a nationally ranked opponent. Although it could not have been much worse.

Facing a reality check following last Saturday’s disappointing three-point loss to Mississippi in Oxford, the Wildcats were without starting quarterback Will Levis, who missed the first start of his Kentucky career with an injured foot. He watched from the sideline with his left foot in a boot as 13th-ranked Kentucky fell 24-14 to South Carolina in front of a full house at Kroger Field.

“We’ve got to play really good as a team and that’s my biggest disappointment,” Kentucky coach Mark Stoops said. “For us, we’ve always (had to) be good as a team (to win games). That’s the strength of our team and we didn’t do that tonight. We weren’t good in a lot of different pieces and that’s not good.”

Stoops didn’t elaborate on Levis’ injury, only saying he is still day-to-day despite making progress last week. The Kentucky coach is “not sure” when he will return.

“Will was trying (last week) and he was getting better,” Stoops said. “The injury he has it’s hard to tell (when he will be back). I’m not trying to play any games with anybody. It’s an injury. When he can play, he will play.”

“After the game, I jumped everyone. The players, the coaches and even myself,” he said. “I didn’t get this team ready to play. It was an attitude I haven’t seen around here for a long time.”

Kentucky redshirt freshman Kaiya Sheron from Somerset made his debut as the starting quarterback, throwing a pair of touchdown passes but was unable to do enough against the Gamecocks’ defense.

The Wildcats (4-2, 1-2 Southeastern Conference) relied heavily on their running game, anchored by Chris Rodriguez, but seemed lost without their star quarterback in the lineup. Despite the effort by Rodriguez, who rushed for 126 yards on 22 carries, the Wildcats dropped their second straight conference game that likely will push UK out of the AP Top 25 for the first time this season.

Sheron’s first collegiate play couldn’t have been more disastrous. He handed off to Rodriguez on an intended reverse, who botched the handoff and fumbled. The Gamecocks recovered and rumbled to the two-yard line and scored on the next play. It was that kind of night for Kentucky, which was tied 7-7 at the half but couldn’t contain South Carolina in the second half.

Sheron showed some flashes and executed a fake pitch play into a 16-yard touchdown strike to Jordan Dingle up the middle to tie the score at 7-7. He threw for 178 yards, two touchdowns and an interception in his first start as a Wildcat, but was sacked six times for a loss of 54 yards.

Kentucky overcame another fumble and missed a 45-yard field goal attempt, while the defense held after a blocked punt inside the red zone. Kentucky also had an interception in the first half that kept the Gamecocks’ offense off-balance and scrambling to make plays.

It changed in the second half.

South Carolina (4-2, 1-2) held the ball long enough — a crushing seven-minute drive that resulted in a field goal and then added a touchdown in the third quarter — to end a five-game losing streak to the Wildcats in Lexington. Kentucky had won the three previous games against the Gamecocks.

South Carolina didn’t give the Kentucky offense much of a chance to get into a a steady flow and dominated in the second half. The Gamecocks had 266 yards in the second half after collecting just 90 in the first two quarters.

The schedule doesn’t get any easier for the Wildcats in October. Kentucky faces surging Mississippi State at home on Saturday and meets Tennessee following an open date on Oct. 29 in Knoxville. The Bulldogs and Volunteers were victorious earlier Saturday with each team scoring 40 points in wins over Arkansas and LSU, respectively.