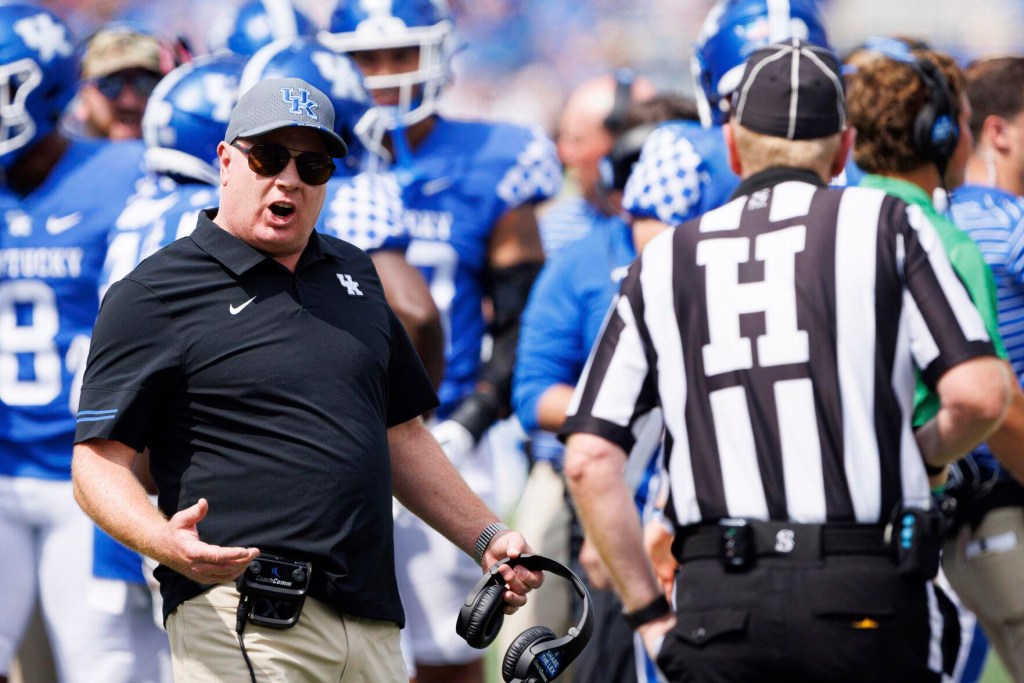 Kentucky head coach Mark Stoops talks with an official during the first half of an NCAA college football game against Youngstown State. Michael Clubb/Kentucky Today photo

The 9th-ranked Wildcats (3-0, 1-0 Southeastern Conference) committed three turnovers in the team’s first shutout since 2009. Stoops said Monday he was “really kind of disappointed and a little unhappy with some of the undisciplined play that we had from this past week.”

“Not to take away from so many players that did a great job, and really, defensively, it was a very good effort once again,” he said. “I felt like the guys were really dialed in, detailed and executed at a very high level. Offensively, there are some things that we have to get ironed out. It just felt like there was a person here, a person there, just undisciplined play.”

Stoops said the Wildcats can’t afford four fumbles, double-digit penalties (for a loss of 74 yards), especially will an SEC road game looming at Ole Miss at noon on Oct. 1.

“Anytime you have 10 penalties, three turnovers, four fumbles, and you do that at home, it just shows you that that attention to detail was not there,” Stoops said. “We go on the road a week before, play in a hostile environment, and we only have two penalties and play relatively clean.”

Stoops was happy with the play of quarterback Will Levis, who threw for 377 yards, two touchdowns and two interceptions. Stoops said Levis “made some amazing throws again on Saturday.”

“Really, the talent just jumps out at you,” he said. “When he gets moved off his spot and still have the awareness and the arm talent and the way he throws some of them is just really, really talented thrower. He made some plays that kind of go unnoticed in a game like that.”

Stoops added the two interceptions by Levis weren’t all on the senior quarterback and said the receivers need to take ownership at the receiver slot.

“We need to play better around him,” Stoops said. “Some guys need to step up and play more precisely. I think him holding the young wideouts accountable, all the little things and continue to grow. It only takes one guy. You have heard the frustration and me talking about it, a guy here and a guy there, but that’s all it takes. You need everyone on the same page.

“That is why this is the ultimate team sport. You have to have everybody on the same page or it’s not going to work. There are a lot of little things. He threw one off-balance without his footwork being correct, but it was also a bad route. There was a combination of things on that. We will continue to grow.”

Stoops, who has helped raise more than $2 million for the Kentucky Children’s Hospital, was named the honorary head coach of the 2022 Allstate American Football Coaches Association (AFCA) Good Works Team®, it was announced Monday.

Stoops has a passion for helping children and has tookm part in a countless number of community service projects he has worked on in his 10 seasons at Kentucky.

Each July, Stoops spearheads a fundraiser, called “Coaches for the Kids” which raises money for the Kentucky Children’s Hospital. Since 2013, the event has raised over $2 million. The event was originally started by former head coach Rich Brooks and Stoops has worked tirelessly to make sure the event has grown and continues to raise money for the children’s hospital.

“It is an honor to be the honorary coach of the Good Works Team,” he said Monday. “I always just try and do my part, put my head down and go to work. There’s enough to do to keep me extremely busy, but I also like giving back and I’ve attached myself to the UK Children’s Hospital really since day one and it’s an honor for us to be a part of that and help in any way we can.

“My staff has really chipped in and done an awful lot as well and as I mentioned, at one of the functions we have every year, it just takes any of us to have our child be sick and spend any time over there and you can see why it’s pretty easy to attach yourself to them.”