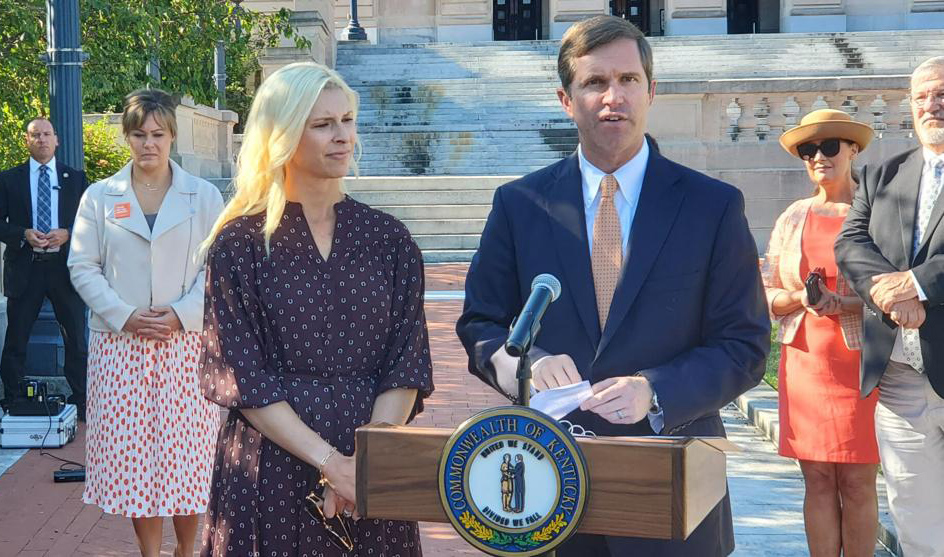 A ceremony at the state Capitol grounds Wednesday marked September as Hunger Action Month in Kentucky.

“Sadly, we have 573,300 adults who have food insecurity,” said Katrina Thompson, executive director of Feeding Kentucky. “We also have 162,100 children that are hungry in our state, and don’t know where their next meal is coming from.”

Gov. Andy Beshear said: “Far too many Kentuckians are going hungry, as we speak here today. Our state has the ninth highest rate of hinger in the country. To give some perspective, one out of every seven Kentuckians don’t always have enough food, or enough nutritious food, week to week.”

He added Kentucky has the highest rate in the nation of older adults facing hunger.

First lady Britainy Beshear said anyone can help and issued a challenge.

“If you are cleaning out your pantry, you have canned food and crackers that have never been opened and have not expired, those are things that your community food banks are looking for,” she said. “They can take all those things, and you are helping to feed somebody.”

Lt. Gov. Jacqueline Coleman added, “The epidemic of hunger is something that knows no bounds. As a former classroom teacher, I saw it first-hand every day, every year I was in the classroom. It doesn’t care about your zip code, or your race or your gender, or your political party. It attacks urban and rural communities alike.”

Agriculture Commissioner Ryan Quarles said, “Fighting hunger is something that should unite all of us, and we’re doing it right here in the Commonwealth of Kentucky. Hunger exists in every community, county, and city in our state.  One the unfortunate realities of combating food insecurity is the stigma attached to it.  Oftentimes, those without means are unable to ask for help, as they’re embarrassed.”