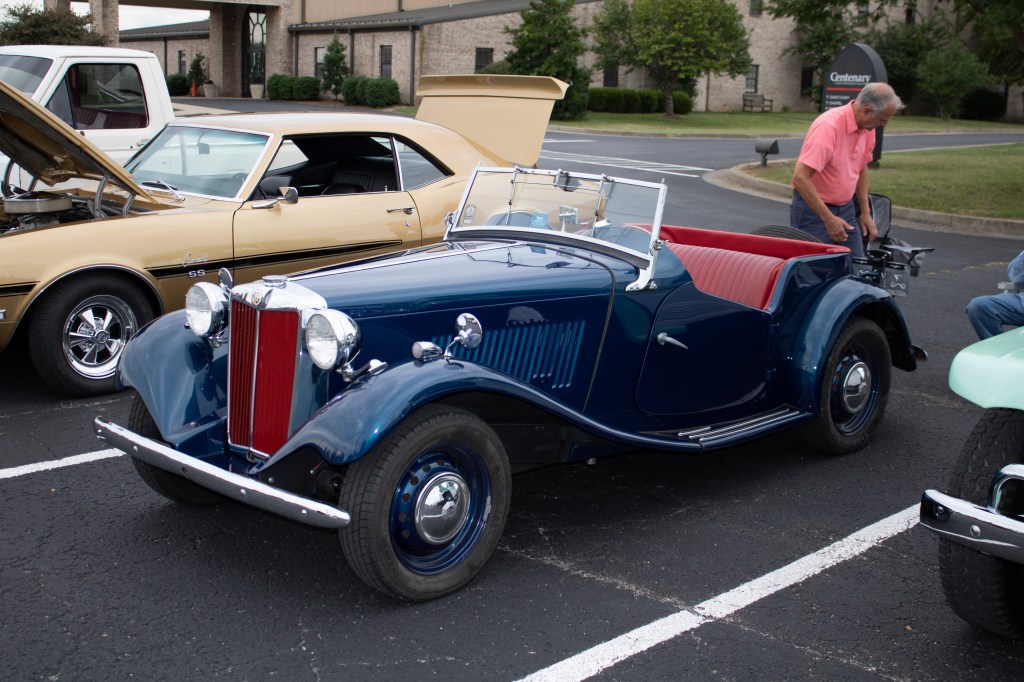 On display at the car show was Bill Blair’s 1953 MG. Photo by Lance Gaither

It did not take long for the Centenary United Methodist Church’s parking lot to fill up Saturday morning as car enthusiasts of all ages brought their vehicles to show off at the first ever Cars and Coffee event in Danville.

The event was organized by Ron Barbato and Landon Meserve, two car lovers who wanted a to create a fun and safe place for other enthusiasts to come and admire each others rides. More than 200 people turned out for the inaugural event.

“The most difficult part was getting permission from local folk who trust people to not destroy their property,” Meserve said. “We wanted to find a lot that was suitable for any type of car owner. We wanted to keep it central to Danville.”

Landon believes he will need a larger venue for the next event, which could be as early as October, he said. He hopes the show eventually will become a monthly event.

Cars on display ranged from modern imports to classic muscle and even cars that you might never see on the road anywhere else. One owner, Bill Blair, brought a 1953 MG TD, a compact convertible coupe from England. The car had been in his family for more than 30 years. It was first owned by his sister who gave it to his nephew who gave it to him. He has owned the car for a few years now and fixed it up with the help of a neighbor. He said he has taken it to several car shows in the time he has owned it and he has only see a few others like it.

Other cars included a 2011 Porsche Cayman owned by Ron Barbato.

“I wanted one for about 50 years, I’ve been a car guy all my life and I’ve always liked Porches,” Barbato said. “It’s a dream come true.”

He wasn’t the only person their who was happy to share their excitement over owning their dream car. Owners both young and old had stories about why they loved their cars. Some said it was because a family member had one when they were a kid and that they always loved it. Others said they saw their car in a movie and fell in love. Others had to have one the moment that saw one on the road.

The Cars and Coffee meet ups are family friendly events and everyone is welcome to come and admire the machines. The next event is expected to take place in October with a location yet to be picked. A hiatus will be taken over the winter, but organizers  hope to have meet ups monthly beginning after winter next year.