Kentucky suddenly thin at running back 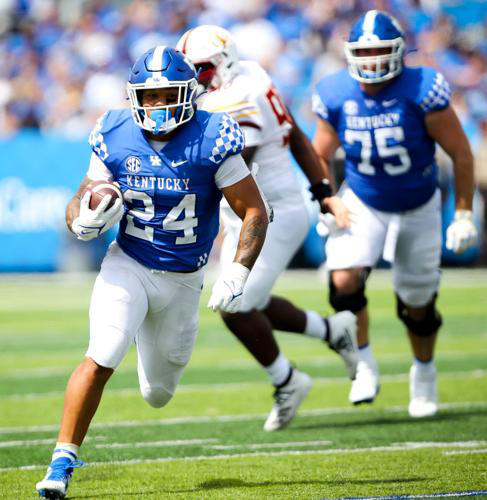 Kentucky still is without the services of suspended running back Chris Rodriguez (24). Kentucky Today photo

Kentucky running back Chris Rodriguez is still missing on the team’s depth chart and backup Ramon Jefferson won’t be available when the Wildcats open Southeastern Conference play Saturday at Florida.

In a press conference Monday, Kentucky coach Mark Stoops offered no update on the status of Rodriguez, who was suspended and missed the season opener, a 37-13 win over Miami (Ohio) Saturday at Kroger Field. He added the situation continues to be “out of my hands.”

“I wish I (had an update),” Stoops said. “Being a holiday (Labor Day), I don’t have anything I could report. I’ve always been transparent with you and tried to be the best I can. I’ve been advised, there are things going on, there are layers to this I’ve been advised (that) I really cannot comment on it. It’s not that I’m trying to hide things from you. The players have their own rights and things of that nature with this situation.”

In addition to Rodriguez, Sam Houston State transfer Ramon Jefferson, who rushed for 10 yards on two carries in his debut, will be out for “several weeks (and) for the extended future.” JuTahn McClain is “week to week” leaving the Wildcats more depleted in the backfield.

“We got banged up,” Stoops said. “We’ll have to see from there, where things go.”

The absence of Rodriguez was evident against the Redhawks. The Wildcats finished with just 50 yards rushing, led by starter Kavosiey Smoke, who rushed for 32 yards on seven carries.

“We need to be able to run the ball more efficiently,” Stoops said. “It wasn’t awful. When you add in the sack yardages, it takes off the net (gains). … we could get better on that.”

“He was really solid (in camp),” Stoops said of Wright. “He got dinged up late in camp and now he’s back healthy. … It’s nice to have Lavell back, because he’s a tough, physical runner. At some point, he was running with the (first team) and in the middle some last spring. We have a lot of confidence in him.”

While depth in the backfield has taken a hit two weeks into the season, Stoops and his staff have tweaked the offensive line, moving Kenneth Horsey from left guard to left tackle. The Wildcats gave up four sacks for a loss of 26 yards in the opener.

“What we’re looking for is getting our best five (offensive linemen) on the field,” Stoops said. “We feel like we’ve got to experiment with this and we’ve done it before. It’s not something that’s unusual for him.”

Kentucky freshman Barion Brown was named SEC Special Teams Player of the Week following his collegiate debut in the opener Saturday. Brown had a 100-yard kickoff return for a touchdown to open the second half and became the first Kentucky player to return a kickoff return for a score in 13 years.

He added a 21-yard kickoff return that sparked the team’s opening touchdown drive and caught three passes for 45 yards.