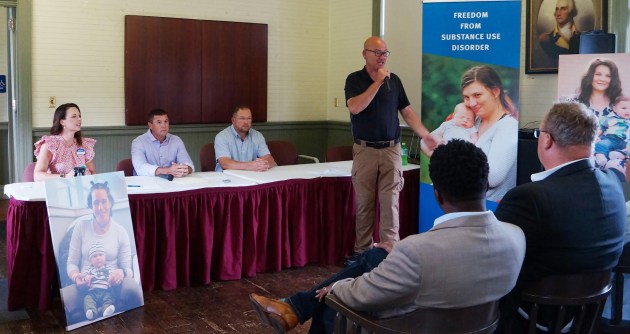 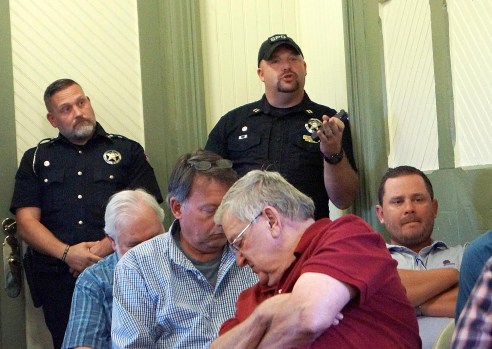 STANFORD – Stanford residents had a chance to learn more about the organization Volunteers of America (VOA) and the services it plans to provide to Lincoln County during a town hall meeting earlier this week.

VOA is a non-profit that has been operating programs and services throughout Kentucky for the past 126 years.

Meade said when Hancock approached legislators about expanding  VOA into more Kentucky communities he thought it would be a great opportunity to help Stanford.

“Very few times does an organization get their name in the state budget. You have to be top-notch. You have to be someone who brings a tremendous value to the communities that you’re  a part of, a tremendous value to the state and you have to be a community partner when you come,” Meade said. “That’s what they do; when they come to these communities they are partners. They are great neighbors and they want to make your community better.”

Woods Adams said he was able to tour the Manchester facility in Clay County and was impressed.

“I think we all agree that we do have a need for them in the community to help alleviate some problems that do come up from time to time,” Adams said. “…it is more than just a drug rehab facility and that is what caught my ear more than anything.”

“In other areas of the Commonwealth where we’ve invested and we’ve done this type of work, we’ve shown that we can create an economic environment where we’re getting people back to work, we’re creating jobs, we’re making the citizenry healthier so they can go on to have long term, productive, successful lives,” she said.

The group is currently looking at property in Stanford, particularly the former hospital on Portman Avenue, to house the Freedom House program. Hancock said they are still negotiating as of this week.

Hancock introduced several VOA staff members from Clay County where the organization has been working for some time.

Randy Craft, a former police officer from Clay County said VOA changed his perspective on drug addiction after he saw the positive changes being made in his community.

“VOA brings these ladies in, they get them drug-free, they get them cleaned up and get them back in control of their life because all they’ve done is just spun out of control. They’re not bad people, they’ve just made some bad choices,” Craft said. “VOA helps deliver a drug-free, healthy baby and then what do they do? They get these women back into the work society. They get them and train them and get them ready to go back into the community to be  productive person in the community. That’s what we’ve been seeing in Clay County.”

Craft said the crime rate doesn’t go up, it comes down, because VOA does more than help women get off of substances, it helps them rejoin the community in a productive way.

Brian Jackson of the Clay County Emergency Management Services said his community was struggling before VOA located there and their partnership has helped turned things around.

“It’s a group of community partners who realized our community is sinking and we all, if the ship floats, the whole ship is going to float, not just part of it,” Jackson said. “So VOA came in and like Randy said, they were a huge part of floating our ship in Clay County.”

Hancock said there are three main programs VOA would like to offer Lincoln County including The Freedom House program which treats mothers with substance use disorder, promotes the birth of healthy babies and works to reunite families.

Another program is a family recovery court that works in partnership with the local family court and allows families who are in the child welfare system because of substance use to access additional supportive services to help prevent unnecessary removal or reunite families who have been separated.

The third program is a partnership with the Department of Community Based Services (DCBS) in which VOA will provide a therapist who will work alongside the front line workers and provide training and consultation associated with substance abuse disorder. VOA will help assess families who have been identified as having addiction and will give them access to treatment.

“We understand that we can’t just treat the addiction or mental health; we have to teach them how to be self-sustaining for when they leave our program,” Hoskins said.

The next phase is called after-care for women who are local.

“The goal is to try to maintain contact with them for at least three years because we know that we can’t just keep them for 30 days or 90 days and turn them loose and say ‘good luck to you’ because chance are they’re not going to be very successful,” she said. “That gives them basically a hand to hold for three years.”

VOA also offers jobs to those who have turned their lives around after battling addiction. Ashley McCarty shared her personal testimony during Monday’s town hall and how she now gets to help others through her job as senior manager of community engagement.

Kristin Pennington, a Stanford native and recovering addict said she wishes VOA had been in Stanford when she was struggling and believes it would be a great way to help others like her in the community.

Pennington said she was separated from her children, and while she made the tough decision to stay separated from them and in treatment, she wonders how many mothers quit treatment early just to be with their kids. She said it also put stress on her grandmother who took care of her kids while she was in treatment.

VOA Freedom House allows women to bring their children, no matter their ages or number of children, while the mother is in treatment.

“I just think it would be amazing to have a recovery center where the children could be there with them because not only are the children being affected when the mom is taken away, but the whole family,” Pennington said. “I feel like there is a lot of potential with the people in the town and I feel like we need something that will allow people to get away from addiction and get their feet on the ground…and be a contributing member of society.”

The Freedom House is staffed 24 hours a day and clients are never left alone or unattended, Hancock said. If a woman decides to leave treatment early, she said they are not released without help or transportation.

“Even if people want to leave our program against staff advice or go AWOL, we don’t just let them walk out the door and say ‘goodbye and good luck,’” Hancock said. “We do discharge planning with them and come up with a plan that’s very real…we will provide a warm hand-off to that next place.”

Lincoln County Magistrate David Faulkner was last to speak and said his own grandchild went through rehabilitation.

“For a long time I didn’t sleep,” he said. “For the last four years I have slept like a baby. It’s the most wonderful thing, when it’s successful. I think you’ll find that Lincoln County local government…we’re perfectly willing to do whatever we need to do to support this. We welcome the opportunity to work with you guys and do whatever it takes to make it successful.”