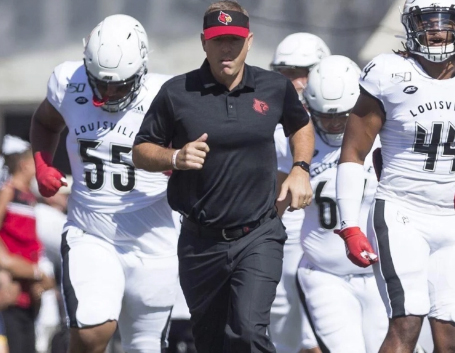 Those are some of the reasons why this looks like a pivotal, make-or-break season for Louisville football coach Scott Satterfield and why his name can be found on nearly every list of coaches on the hot seat. In the ACC he shares that dubious distinction with Georgia Tech’s Geoff Collins and Syracuse’s Dino Babers, not exactly welcome company.

Satterfield’s perceived shaky status is the elephant in the room and no one had broached the touchy subject until I asked him during the first of his weekly press conferences Tuesday afternoon whether he considers this a critical season both for himself and the program. I also asked for his reaction when he sees his name on a hot seat list.

“To me, I think every year is a crucial year,” Satterfield said. “I mean, it doesn’t matter, you’ve got to go win in this business. There’s no nobody wants to be average. Nobody wants to be below average. I mean, you have to go win football games and we all know that. We feel like we’re headed in the right direction and have been heading in the right direction since we’ve been here.

“We’ve had a lot of tough things thrown our way over the last three years, you know, and we’ve weathered the storm. We continue to fight, continue to battle and I approach every year that way. Nothing changes for me and my staff and how we approach it. It’s been a great offseason, so we’ll we’ll go out there and hopefully put a great product on the field and go win some games.”

As far as the hot seat factor is concerned, Satterfield — who is always cordial and willing to answer any question from the media, no matter how uncomfortable the subject — was uncharacteristically silent.

He ignored the question the first time, so I asked again and he shrugged and said softly, “I don’t react to it.”

So how much danger of losing his job is Satterfield in as he heads into his fourth season with the Cards? Barring a complete collapse on the field, UofL’s red-hot recruiting for the 2023 class, a haul that has produced an unprecedented ranking in the top-15, could be enough to save him should the Cards again fall short of expectations, despite returning 17 starters from a team that lost four games by a touchdown or less in 2021.

Citing the recruiting success and what he sees as a high-quality staff, athletic director Josh Heird didn’t sound like a man contemplating a coaching change when discussing the football program with WDRB columnist Rick Bozich in mid-July.

“I think Scott is evaluating his program and saying, ‘Hey, what do we need to change? What do we need to tweak?’ I think he’s got an excellent staff around him. If you look at some of the additions and changes he’s made in the weight room with Ben Sowders, then you look at (offensive coordinator) Lance Taylor and (co-defensive coordinator) Wesley McGriff. . .you go right on down that list, and it’s created momentum.

“Now, we have to win football games. But it’s really nice to have positive momentum on your side. And I’m optimistic, I really am. I just think there’s a lot of good things going on down there in the Schellenberger Complex. Hopefully, that translates into wins come September and October.”

Satterfield can sell a promising future because of the impending recruiting class, and a good class has been enough to save a number of coaches whose tenures were in peril. But if UofL stumbles out of the gate in road games at Syracuse and Central Florida before even playing its first home game against Florida State on Sept. 16, grumbling by fans is likely to resume and all bets are off.