UK faces an improved SEC in ’22 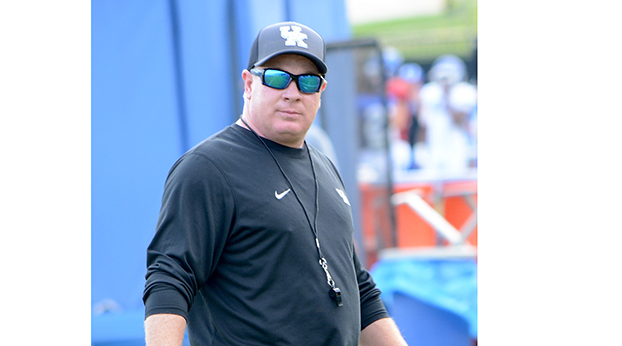 The 2022 campaign for UK football is just around the corner and there’s a lot of excitement in the Big Blue Nation.

After a historic 10-3 campaign with five SEC victories in 2021, the Wildcats — who have several returning standouts, including QB Will Levis — should be plenty good this fall. Coach Mark Stoops’ club also has a favorable schedule with eight home games at Kroger Field, and the Cats don’t even play Western Division favorites like Alabama and Texas A&M, both in preseason Top 5 or 6, this time around.

Here’s my annual UK game-by-game forecast for this season.

• Miami-Ohio (Sept. 3, Lexington). This Ohio school won’t be that easy to beat as the Redhawks are projected to finish first in the Mid-American Conference’s East Division, according to Athlon Sports. Miami has a proven and experienced QB by the name of Brett Gabbert, a three-year starter. The 7 p.m. season-opening matchup will be shown on ESPN+/SEC Network+ (online). UK by 9.

• Florida (Sept. 10, Gainesville). Could the Wildcats stop the Gators again after beating them 20-13 at home last fall? Dan Mullen is no longer there as Florida has a new coach.

Billy Napier is the new boss who has coached under Dabo Swinney at Clemson and Nick Saban at Alabama. The once-powerful Gators, who will be hosting Utah, a Top 10 squad, in the season opener, are still way behind Georgia. The ESPN showdown kicks off at 7 p.m. Florida by 2.

• Youngstown State University (Sept. 17, Lexington). This will be the first-ever contest between UK and the Penguins of the Missouri Valley Conference. SEC Network will carry it at noon.

By the way, Youngstown State will visit Ohio State in 2023 for almost $1 million as compared to the $550,000 payout by UK, according to various media reports. UK by 27.

• Northern Illinois (Sept. 24, Lexington). Like the Miami game, this won’t be a pushover for the Wildcats. Athlon Sports has picked the Huskies to win the West Division of Mid-American Conference. They defeated Georgia Tech 22-21 last year. Both Miami and Northern Illinois are ranked ahead of Vanderbilt in a preseason national poll.

Interestingly, before the Huskies travel to Lexington, they host Vanderbilt the previous weekend. That game will be shown on CBS Sports Network. UK by 14.

• Mississippi (Oct. 1, Oxford). This could be a toss-up game with a slight edge going to the Rebels because of their home-field advantage. Coach Lane Kiffin’s Ole Miss club is coming off a 10-3 season but needs a good replacement for standout QB Matt Corral. The Rebels may have found one in Jaxson Dart, a transfer from Southern Cal. Ole Miss by 6.

• South Carolina (Oct. 8, Lexington). This could be another close game. The Wildcats barely beat the Gamecocks 16-10 on the road last fall. USC QB Spencer Rattler transferred from Oklahoma. Second-year coach Shane Beamer has brought a lot of excitement to South Carolina after a surprising 7-6 campaign in 2021, including a 38-21 bowl win over North Carolina. UK by 3.

• Mississippi State (Oct. 15, Lexington). Mike Leach, a former UK assistant, is a fun coach to watch with his pass-happy offense. The Bulldogs’ QB Will Rogers is back for his junior year. The Cats lost at MSU 31-17 last fall. UK by 7.

Kentucky, which gained 612 total yards offensively, had several chances to tie (with a field goal) or to win (with a TD) in the end but it lost to then first-year coach Josh Heupel and the Vols 45-42. Tennessee, which posted a 7-6 mark last season, is expected to improve. UT by 6.

• Missouri (Nov. 5, Columbia). Third-year coach Eliah Drinkwitz and his rebuilding Tigers are still struggling with so-so records. The QB position is a question mark after the departure of Conner Bazelak to Indiana. UK by 9.

• Vanderbilt University (Nov. 12, Lexington). It’s the same old story at Vandy. Coach Clark Lea, who served as defensive coordinator at Notre Dame from 2018-20, is beginning his second year at his alma mater (two degrees) and is trying to make things better in the Music City. Vandy kicked off its season with a win at Hawaii. For the past two years, Vandy hasn’t won a single SEC contest. UK by 14.

• Georgia (Nov. 19, Lexington). This could be the SEC East Division title showdown that we have been waiting for.

Georgia is still loaded even after capturing the 2021 national championship and the loss of 15 players to the NFL. Coach Kirby Smart’s club opens its season against Oregon in a Top 10 matchup in Atlanta. Kentucky lost to the Bulldogs 30-13 last year. UGA by 14.

• Louisville (Nov. 26, Lexington). The Cardinals have a chance to improve from last season’s 6-7 team as senior QB Malik Cunningham returns. Coach Scott Satterfield needs to win more often as the fans are getting impatient after a three-year mark of 18-19. Against U of L, Kentucky has won three straight games in blowouts. UK by 10, finishing its regular season with a not-so-bad 8-4 mark, including four SEC victories.

Jamie H. Vaught, a longtime sports columnist in Kentucky, is the author of five books about UK basketball, including recently-published “Chasing the Cats: A Kentucky Basketball Journey.” He is the editor and founder of KySportsStyle.com Magazine, and a professor at Southeast Kentucky Community and Technical College in Middlesboro. You can follow him on Twitter @KySportsStyle or reach him via email at KySportsStyle@gmail.com.