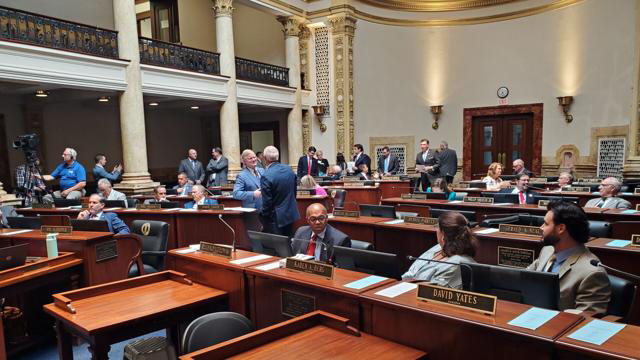 A special legislative session began Wednesday, with executive and legislative branches of government agreeing to spend $212.7 million over the next six months to help rebuild communities devastated by the deadly flooding in eastern Kentucky that began July 26.

A total of $200 million will be allocated from the Budget Reserve Trust Fund, part of the state’s so-called $2.7 billion rainy day fund, to Eastern Kentucky State Aid Funding for Emergencies (EKSAF). It breaks down as follows:

• $115 million to the Department of Military Affairs Division of Emergency Management to provide financial support to cities, counties, school districts, state agencies and nonprofit or public utility service providers located in areas named in the Presidential Declaration of a Major Disaster. This includes reimbursement for services, personnel and equipment provided during the response and recovery phases; cost of replacement or repair of publicly owned buildings and their contents; and advancement of funds to local governments, utilities and school districts awaiting insurance claims and Federal Emergency Management Agency disaster assistance.

• $45 million to the Kentucky Transportation Cabinet’s highways budget for the state matching funds to pay for bridge and road repairs and replacement.

• $40 million to the Department of Education for financial assistance to school districts to support repairs of school building facilities, additional transportation costs for displaced students and wrap-around services for schoolchildren and their families recovering from the impacts of the storms and flooding.

In addition to the above, nearly $12.7 million in fiscal year 2022-2023 from the State Fiscal Recovery Fund of the American Rescue Plan Act of 2021, or ARPA, is earmarked for EKSAFE. These funds will go toward water and sewer infrastructure projects, the building of replacement school facilities and housing sites not previously used, but now designed to mitigate the risk of future flooding.

Any reimbursements from FEMA, would then go into the EKSAFE fund.

The legislation will also allow the Commissioner of Education flexibility to waive up to 15 student attendance days through Jan. 20, 2023, due to the flooding. In addition, a school district may temporarily assign students to remote instruction due to uninhabitable school buildings. Up to 20 days of remote instruction may be permitted, with safeguards. It also expedites the approval process for school district facility plans to renovate, repair and replace flood-damaged school buildings.

“Since the beginning of this natural disaster, I’ve been speaking with legislative leaders about the need for this special session. These conversations have been productive, because when it comes to helping Kentuckians during their time of need, our work isn’t bipartisan, it’s nonpartisan,” Beshear, a Democrat said. “To the people of Eastern Kentucky, today we are once again showing you that we are with you and we’re going to be with you as long as it takes to rebuild.”

Senate President Robert Stivers, R-Manchester, said, “Our cities and counties are hurting in the worst way.  Our collective, nonpartisan effort today is the initial step to bolster local city and county government services impacted by the flood disaster. You should know you have our long-term commitment when we are back in full session in January to address your long-term needs.”

House Speaker David Osborne, R-Prospect added, “We’ve been working closely with legislators in the areas impacted by the flooding, as well as local officials, the executive branch and our federal delegation, to identify the most effective way to help. Fortunately, we have a model that we know works, and for the first time in history, we have the resources available in our budget reserve trust fund to commit to EKSAFE.”

The three men noted, the legislation is just to tide things over until the 2023 regular session beings in January, when they will have a better idea of the total scope of losses.

Lawmakers are expected to wrap the session up today.