Former UK player on a mission to end hunger 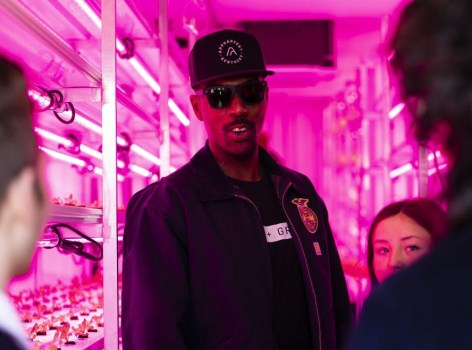 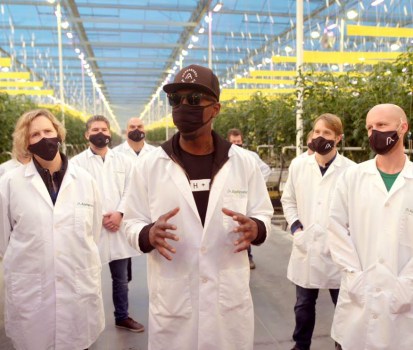 Ramel Bradley of AppHarvest has been helping feed the hungry since he was a child growing up in New York City. Photo courtesy of AppHarvest 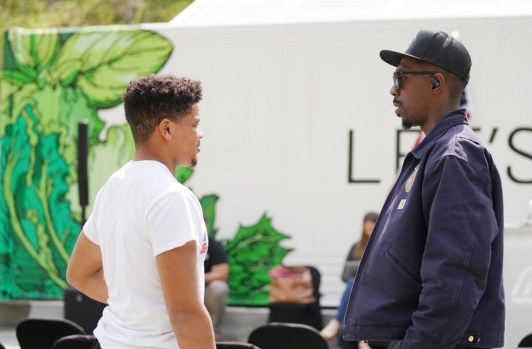 Part of spreading the word of the AppHarvest mission for Ramel Bradley, right, is to meet with high school students around the state. Photo courtesy of AppHarvest

Attending the University of Kentucky on a scholarship nearly 20 years ago eventually provided Ramel Bradley with a chance to achieve two of his lifelong goals – a career in professional basketball and helping feed the hungry.

As a youngster in Brooklyn’s Clinton Hill neighborhood, Bradley was New York City’s next basketball phenom, showcasing his skills on the city’s playground network. In the evening, when the lights on the courts were turned out, Bradley would deliver meals to his neighbors who did not have enough to eat.

“First, I always wanted to play professional basketball,” Bradley said. “Growing up in the Clinton Hill community in Brooklyn, when I came home every day, I delivered meals to people in our neighborhood.”

Now, at age 37, and his basketball days over, Bradley is just getting started when it comes to fulfilling the second half of his life’s goal of feeding the hungry. Today, Bradley is the community director for AppHarvest, a Morehead-based, controlled-environment agriculture company that combines cutting edge technology and sustainable practices to produce more food with fewer inputs.

AppHarvest founder Jon Webb has a vision to make Kentucky the ag-tech capital of the world while also helping solve food insecurity. And he is well on his way to accomplishing that.

According to a 2020 study headed by James P. Ziliak, Ph.D., an economist in UK’s Gatton College of Business and Economics, about 1 in every 10 Americans and 1 in every 7 people in Kentucky do not have enough to eat.

Located within a day’s drive of 70 percent of the country’s population, AppHarvest is out to change that. The company has established a series of high-tech farms across the state in Morehead, Richmond, Somerset and Berea that grow produce using sunshine and stored rainwater through a system that uses up to 90 percent less water than open-field growing while producing yields up to 30 times that of traditional agriculture on the same amount of land without agricultural runoff.

“We are completely transforming the business of agriculture,” Bradley said.

“We are providing access to fresh, healthy and nutritious food for people in eastern Kentucky – and in New York City.”

Providing meals to the hungry is something Bradley has been doing most of his life.

The product of a single-parent home, Bradley was 9 years old when his grandmother, Bishop Alethia Rice, came to live with him and his mother, Daisy Rice. Dedicated to serving others, she prepared meals in the family kitchen to help feed neighbors who did not have enough to eat, and Bradley would deliver them. She eventually founded the Bishop Memorial Mission in Brooklyn, which still operates today with three simple goals in mind, give hope to the hopeless, help to the helpless and food to the hungry.

“That all started in my grandmother’s kitchen,” Bradley said. “Our neighborhood was a food dessert. I remember how good it made people feel to have enough food.”

Bradley is a direct byproduct of what he described as his mother’s bold independence and his grandmother’s unwavering service to others.

“Ultimately, everything I am today is because of them,” he said. “They took action, and set that example for me.”

That foundation established years ago in Brooklyn eventually helped Bradley discover a career after his basketball-playing days were over.

A three-year starter at UK under former coaches Tubby Smith and Billy Gillispie, Bradley went on to play professionally for parts of nine seasons in Croatia, France, Turkey and Israel. It was during his playing days at Kentucky when he met Webb, then a marketing major at UK who would go on to eventually start AppHarvest.

In those days, Bradley was a fashion major, but it did not take him long to realize that choice was a mistake. He eventually settled in to the Community and Leadership Development program within UK’s College of Agriculture, Food and Environment. He figured one day he would return to his roots of helping feed the hungry when his basketball days were over, but he never envisioned being part of a life-changing movement back in Kentucky.

He had returned to New York from playing overseas when Webb contacted him in 2016 and offered him a job helping spread the word about the AppHarvest mission.

“Part of AppHarvest’s mission is to be an active and inclusive part of the communities where we operate,” Webb said. “And I knew with Ramel’s family history of feeding their neighborhood, combined with the Kentucky roots he established since playing basketball at UK, he’d be fantastic at helping us better serve the Commonwealth.”

Bradley who now resides in Lexington and returns to New York one weekend each month to continue his mission in his hometown, bought in completely with Webb’s philosophy. Part of sharing the AppHarvest vision of helping solve a nationwide crisis of food insecurity by increasing crop yield through sustainable agriculture means working with local schools and universities to help develop programs on campuses across Kentucky. AppHarvest also has a working arrangement with Appalachian Regional Healthcare.

“We are completely changing the business of farming,” Bradley said.