Key wants to be top target in UK offense 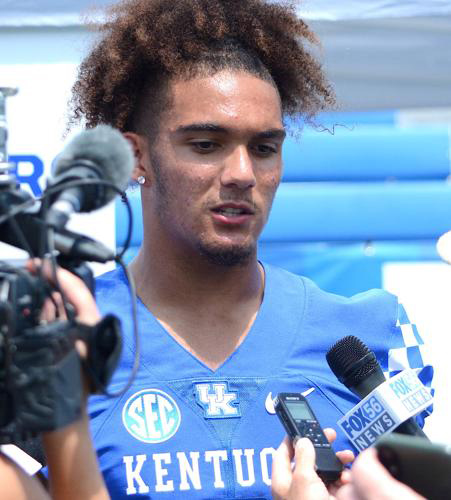 Freshman wide receiver Dane Key wants to be the focus of the UK offense this year. Photo by Keith Taylor/Kentucky Today

Dane Key is ready to make an immediate impact in his debut season in the collegiate ranks. He also wants to take a humble but hungry approach.

“I came in with the mindset to really come in and have an impact, but I’ve just got to keep my head down and keep working hard,” he said.

The Kentucky freshman receiver and former Frederick Douglass High School standout has already made an impression on Wildcats coach Mark Stoops and the coaching staff during spring practice. He was rated as one of the top prospects in the state of Kentucky and won the prestigious Paul Hornung Award as the Kentucky Player of the Year last season.

“We have some guys (receivers) we have to push (but) we’re fortunate, one of the young guys came in spring so we had the opportunity to watch him — Dane Key,” Stoops said at Southeastern Conference Media Days last month. “He’s a special young man, definitely an impact player. You could see right away he has the mindset that he could pick things up.”

Kentucky quarterback Will Levis has already envisioned Key as a potential target on a regular basis this year and likes the energy Key has brought to the team.

“He’s a starter right now,” Levis said. “He’s got to go into the facility every single day and earn that spot every single day. Not a lot of true freshmen have that opportunity, so I’m sure that he’s excited for it.”

Key, whose father Donte’ Key was a linebacker and defensive end at Kentucky (1992-95) and brother Devon Key is a defensive back for the Kansas City Chiefs, wants to build on this success he had last spring.

“My goal for fall camp is get through fall camp and just have as good as a camp as I had in the spring,” he said. “I expect just to come in and just work to the best of my ability and just whatever happened after I came in and worked is what’s going to be the outcome. I am going to keep grinding like I have and keep grinding with the rest of the receivers so I can achieve the outcome that I want.”

Key has already developed a chemistry with Levis and has taken measures to take the quarterback-receiver relationship a step further.

Although confident in his abilities, Key also wants to do whatever it takes for the Wildcats to be successful this season.

“I’ll throw myself out there just to go out there and make a play whenever it’s needed,” he said.