Lincoln County players walk from their fieldhouse down the stairs to the field and toward a waiting line of students as they take the field prior to their game Friday. Photo by Mike Marsee 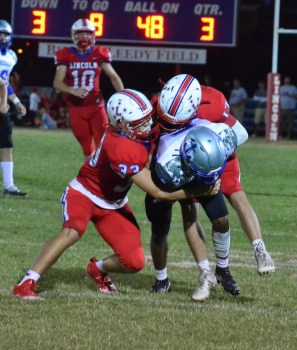 STANFORD — The energy was palpable in the air. Lincoln County fans crammed into the crowded bleachers at Death Valley, eager to see the first game of a new era for their program. Fireworks shot off sporadically.

The Danville Admirals knew  the fireworks weren’t in celebration of them. They knew the large crowd in red to their left wasn’t screaming any of their names. But they did not let that stop them.

Danville dominated the first two quarters Friday night, setting the stage for a 26-14 victory over Lincoln in the PBK Bank-WPBK-FM Death Valley Bowl.

Sophomore Demariah Brown scored twice in the first five minutes and had three touchdowns and a career-best 236 rushing yards to lead Danville to a win in the first game of their second season under Coach Mark Peach.

It was an electric atmosphere for the 25th Death Valley Bowl, with what a Lincoln official said might have been the largest crowd in the event’s history, and Peach said he was pleased with the way the Admirals adapted to that environment.

“These season openers are tricky, particularly on the road,” Peach said. “With the atmosphere tonight, great crowd, fireworks going and everything. I was really proud of our guys with all the struggle and adversity.”

Lincoln fans turned out in droves to support new coach Josh Jaggers in his debut with the Patriots, who rallied in the second half to twice pull within one score but could get no closer.

“You’re never big on moral victories at all, but I saw a whole lot of positives,” Jaggers said.

Brown’s first touchdown came five plays into the game on a 30-yard run with 9:42 left in the first quarter and set the tone for the rest of the game.

The Admirals had problems with penalties throughout the game, most of which were the line of scrimmage or delay of game calls, but they maintained their 13-0 lead until the third quarter.

It was the first time the Patriots had been able to crack a Danville defense that had basically been impenetrable to that point.

“They’ve got speed over there, and they were manning up and bringing the house, which kind of threw off a lot of the rhythm of some of our passing game and (run-pass options) that we’d been doing the last couple weeks,” Jaggers said.

However, Lincoln’s first score only motivated Danville, as Brown returned the kickoff 90 yards for another touchdown that made it 20-7 with 2:28 left in the period.

Lincoln quarterback Sawyer Horton scored on a 1-yard run, pulling the Patriots within 20-14 with 9:38 to play.

However, the Patriots didn’t get the ball back until it was too late. Danville held it for almost seven minutes before the Admirals’ Sasha Wade recovered a fumble on a punt, and Josh Bixler added a clinching touchdown on a 1-yard run with 1:20 to play.

Brown was named Danville’s player of the game after the biggest night of his career.

“It feels great. I’m only a sophomore. More to come,” he said.

The Admirals also got 78 yards from junior Demontrae Trumbo, whom Peach said played well during times when Brown had to come off the field.

In all, Danville got 379 of its 395 yards on the ground, and quarterback Enrique Gutierrez-Jacobs completed three of seven passes for 18 yards in his first start.

“They were doing some things against us in the run game, and we made some really nice adjustments,” he said.

Curliss was named Lincoln’s player of the game after rushing for a team-high 69 yards, and Horton threw for 140 yards on 7-of-14 passing and ran for 30 yards.

“We had our opportunities, and that’s probably the most frustrating part. …When you’re playing good football teams — which our schedule seems to be full of them — you’ve got to seize those opportunities,” Jaggers said.

Despite his disappointment, Jaggers, a former Lincoln and Danville player and the son of one of Lincoln’s most successful coaches, said he was thrilled with the atmosphere for his first game as the Patriots’ coach.

“It was wild,” he said. “You don’t really notice a crowd until you’ve got a crowd like this, and sometimes you’ve got to look around in between plays and just go, ‘Wow!’” The support of the community’s been amazing.”

Danville now has 24 wins in 26 games against Lincoln, but Peach is already looking ahead to the future games, including this Saturday’s game against Garrard County in the Admirals’ Whitaker Bank Pigskin Classic.

“We’ll get better from this,” he said. “Garrard County gave Somerset a really good game. Garrard gave us all we wanted last year, (and) it’s our bowl game, so we need a good week of preparation.”

Garrard fell to Somerset 28-14 in the first game of the Death Valley Bowl. The Golden Lions trailed 14-0 less than five minutes into the game but rallied to tie the game on two long touchdown runs by Cameron Peak before Somerset shut them out in the second half.

Mike Marsee contributed to this story.