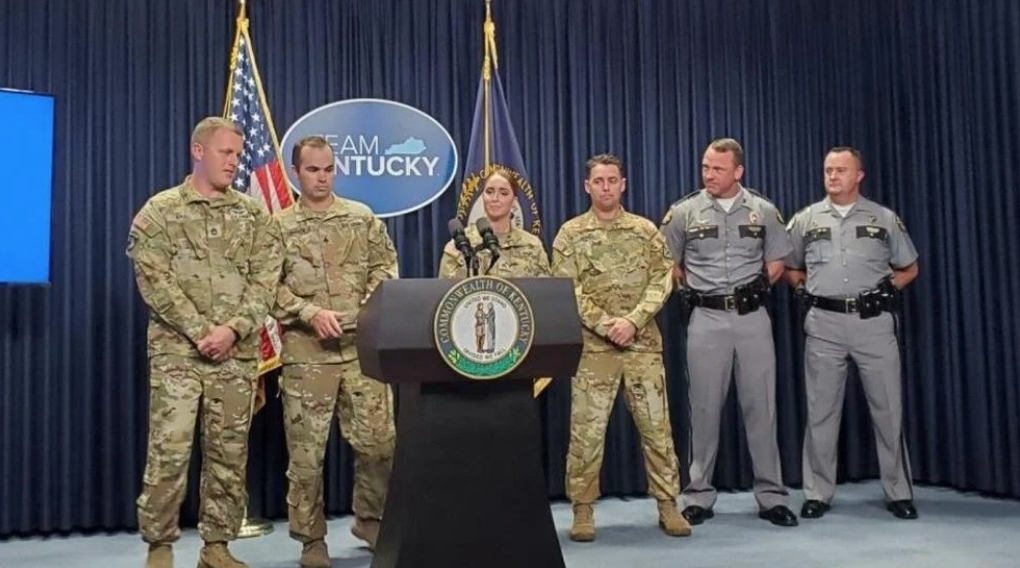 Gov. Andy Beshear recognized the Kentucky National Guard and the Kentucky State Police for their work in the ongoing flood efforts in eastern Kentucky. Photo by Anna Latek

The death toll from last week’s devastating flooding in southeastern Kentucky remained at 37 on Thursday, and the number of missing persons is now down to two, according to Gov. Andy Beshear.

“We still believe the number will go up,” Beshear said Thursday during a Capitol press conference, “but every day that passes makes it more likely that it won’t go up by as much as we had feared.”

The number of missing persons is down to two, after one of the three missing Breathitt County women was found by Kentucky State Police.  Troopers have performed more than 1,000 wellness checks on people who were reported missing by family members when they couldn’t reach their loved ones due to power and cell phone outages.

While 13 counties received a Presidential major disaster declaration, which helps speed aid to state and local governments in relief efforts, the number of counties where individual assistance is available to homeowners and renters is now up to eight: Breathitt, Clay, Floyd, Knott, Letcher, Perry, and Pike, with Owsley County added to the list on Thursday.

Water outages are down to 13,000 connections in the affected area, while the number of those without power has dropped to 5,000.

Well over 1,300 water and air rescues have been performed by the Kentucky National Guard, Kentucky State Police, Fish and Wildlife and other agencies, and the Governor honored some of the KNG and KSP air crews during his press conference.

“These are folks who live in your community who have done something I don’t think we have ever seen,” he said.  “Pulling people from the tops of roofs, hundreds of feet into the air and getting them to safety.  Absolutely incredible work.  People have seen the videos, just astounding, the capabilities and expertise of these amazing Guard members and troopers.  On behalf of Kentucky, thank you all so much.”

Hundreds of people still cannot go home, due to damage or inaccessibility by road.  While many afre staying with family and friends, others are having to go to shelters.

On Thursday, the Red Cross was housing 143 people in six counties, 76 people are in other emergency shelters, 293 are staying at Kentucky State Parks (lodges, cottages and campgrounds), and 68 travel trailers have been delivered to Jenny Wiley, Mine Made, and Carr Creek campgrounds.  These had been used after the December tornado outbreak in western Kentucky and were brought to the flood areas in the east.

Beshear also said while donations are urgently needed in the affected areas, there are only a few methods that can be accommodated.

“Monetary donations help the most; gift cards, where they can get new clothes and other things at the store are helpful; cleaning supplies, water. But do not donate clothing, it’s becoming a significant issue. So much has been provided, that it’s taking up too much space. In fact, we’re having to transport clothing brought into these donation centers to other areas.”