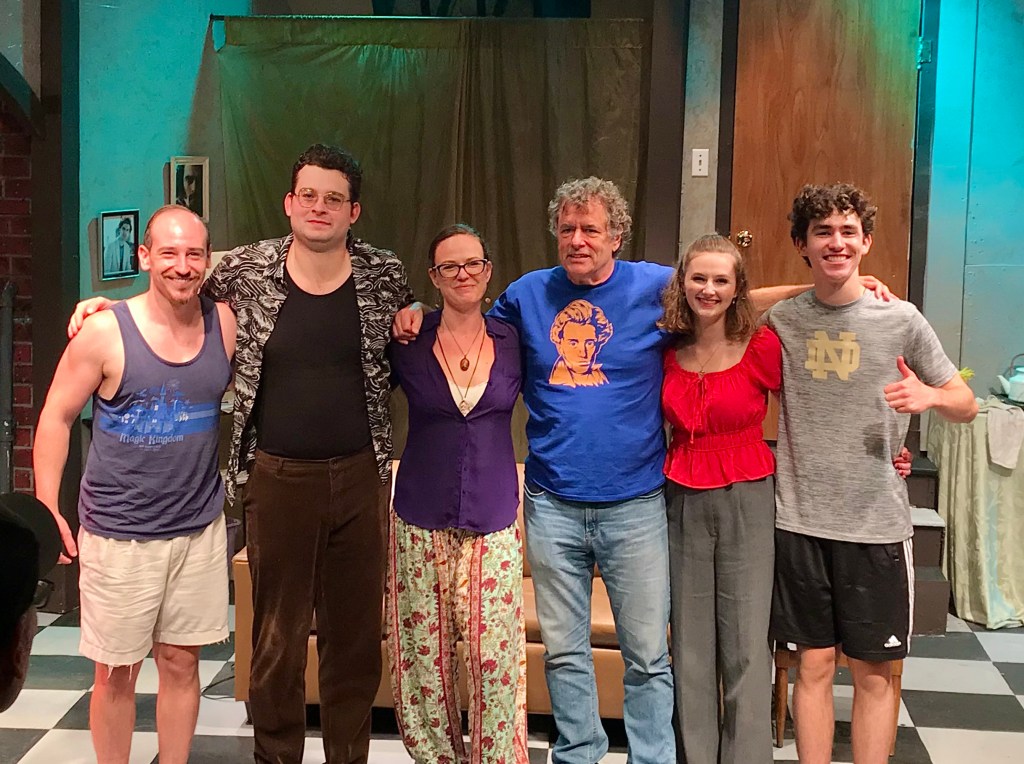 Downs has over 300 productions of his comedies and musicals, and has won many writing awards including two rolling premieres from the National New Play Network. He was a staff writer on the NBC sitcom “My Two Dads,” and a freelance writer on “Fresh Prince of Bel-Air” and “Amen.”

Downs traveled from Denver, Colorado to be in the audience on Saturday. After the show, Downs took the stage to answer questions from the audience and actors.

Artistic Director Robby Henson said Pioneer Playhouse had done “Cockeyed” about nine years ago, and decided to bring it back because they love Downs’ writing, and they wanted a play with a smaller cast. The playhouse has done other plays by Downs, but he had never been there to see one.

Downs said he loved seeing the play again. Since he wrote “Cockeyed” almost 15 years ago, he hardly remembered what it was about.

“I saw you doing this and I thought ‘I haven’t seen that in so long;’ I had completely forgotten it, and so I came and it was like seeing it for the first time,” Downs said.

“Cockeyed” is a modern romantic comedy with a philosophical twist. The main character Phil, played by Adian Chapman, was a philosophy major in college. He falls hopelessly in love with a co-worker Sophia, played by Peyton White. However, Sophia literally cannot see Phil.

The play jokes at the stereotype that philosophy majors can’t get jobs and can’t attract beautiful women. Phil spends much of the play monologuing about this topic, and explores the philosophical ideas about his unique situation.

During the Q&A, Downs said he was not a philosophy major, but he highly appreciates philosophy.

“I love reading philosophy because I think philosophy solves so many problems in our lives,” Downs said.

Chapman said he loved Downs’ writing in this play, despite the fact that his character Phil had by far the most lines of any character.

Downs said he thought each cast member was perfect for their role.

“I thought you were wonderfully sleezy,” Downs said to Silas Waugh, who played the shady boss, Vice President Marley, who is Sophia’s boyfriend in the play.

“I couldn’t be more happy with the cast,” Downs said.

White said that what she has loved most about the play is, “The fun part of it for me was finding those little moments and little pockets that we could create, things that weren’t necessarily in the words of the script, but creating little bits that had these truths in them.”

Several audience members asked Downs about his life and career. When asked how he got his name, Downs said he chose his name after a great great grandmother, Sandal Missouri Downs, who had kept her own name in marriage around the year 1900.

“I knelt down by her grave, and I thought, ‘anyone who has that type of strength, I need their name,’” he said. “I always say create yourself, don’t be yourself; and I didn’t know who I was, so I created myself as William Missouri Downs.”

Downs kept his strength as a writer after years of struggling to make it in Hollywood. When asked to give advice to young writers and actors, he said if they really want to do it, they simply need to keep at it. He said Dave Ramsey taught him to manage money when there were lean times in his career.

He said nights like Saturday are ultimately why they do it.

“Just a wonderful night in the theater, in the middle of Kentucky, with the crickets chirping; this is what it’s about, to sit out, and laugh, have a good time,” Downs said.

“Cockeyed” will continue until August 6 with performances nightly Tuesdays through Saturdays.