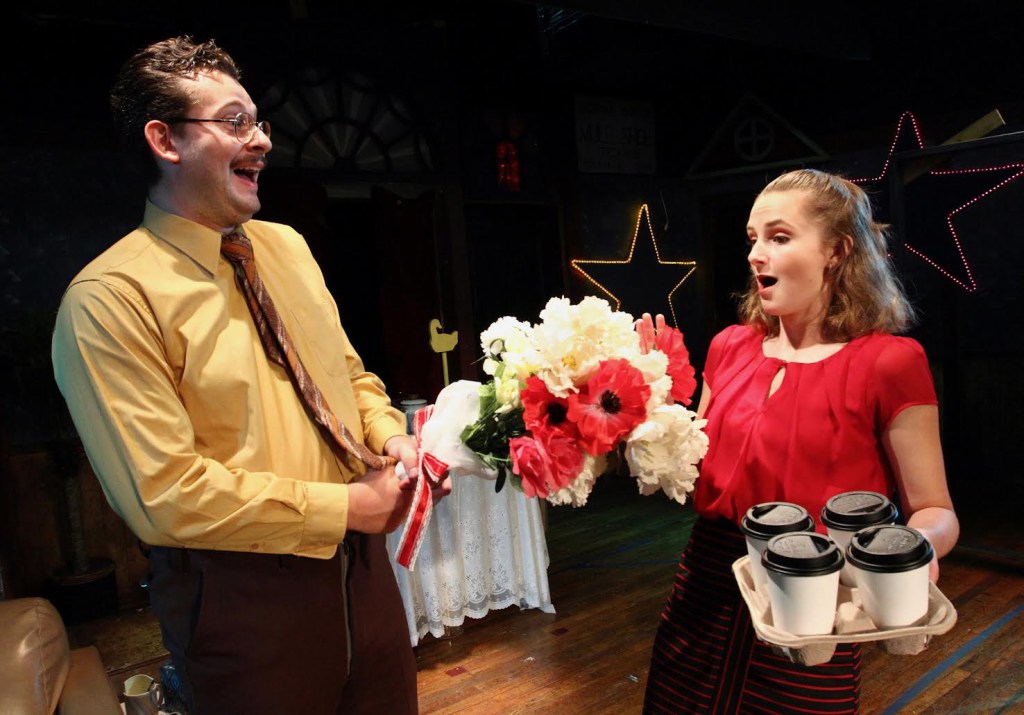 Phil (Adian Chapman) surprises Sophia (Peyton White) with a bouquet in an attempt to win her heart. Photo submitted

Pioneer Playhouse of Danville continues its 73rd season under the stars with Cockeyed, a witty and whimsical modern-day romantic comedy by award-winning playwright, William Missouri Downs.

Cockeyed, which opens today and runs through Aug. 6, tells the story of a nerdy accountant named Phil who falls hopelessly in love with his boss’s secretary, the beautiful Sophia, and who tries to win her heart despite the fact that she can’t see him – literally. 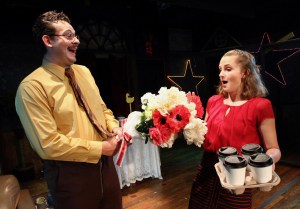 Phil (Adian Chapman) surprises Sophia (Peyton White) with a bouquet in an attempt to win her heart. Photo submitted

“Cockeyed is an extremely well-written romance with a quirky high comedy concept,” says Robby Henson, artistic director of Pioneer Playhouse, which is Kentucky’s oldest outdoor theatre and which was founded by his father, Col. Eben C. Henson in 1950.” We’ve done several plays by the author William Missouri Downs, and besides having a fantastic pen name, he writes thought-provoking works about the foibles of the human condition with great characters, pratfalls, and brilliant dialogue. I think his comedy writing is influenced by his background in television and sitcoms.”

Adian Chapman, who has been a crowd pleaser at Pioneer Playhouse for the past three seasons plays Phil, while newcomer Peyton White plays Sophia. Silas Waugh, who gave memorable performances this summer as the fly-eating, lunatic Renfield in Dracula Bites and the steadfast Beecham in Southern Fried Nuptials, embodies the self-absorbed boss, while Jack Giglia who zip-lined over audiences this year as Dracula himself rounds out the small cast.

“After eight years performing as an actress at the Playhouse, it’s been a true delight to be on the ‘other side’ as a director for Cockeyed,” says Sengstack. “Being that it’s the last show of the season, I’ve developed great relationships with the actors both on and off stage, which makes for a unique, intimate, and rewarding rehearsal process. They’ve been incredibly prepared, and helped my first directing experience at the Playhouse feel remarkably smooth and fulfilling.”

“I’m enjoying every second of it,” says Sengstack. “I think I found a new passion!”

And we’re excited to announce that the playwright himself will actually be here for a performance,” adds Robby.

William Missouri Downs will attend the show on Saturday, August 30, and audience members are invited to stay afterward for a Q&A with the playwright.

“It’s not every day that a nationally known playwright flies in to see a production, so we’re honored,” says Heather. “And we think patrons will enjoy learning more about the play from the writer’s perspective.”

Cockeyed runs nightly, Tuesdays through Saturdays, July 26 through Aug. 6. A BBQ dinner is available before the show. Pioneer Playhouse is an outdoor theatre located at 840 Stanford Road in Danville Kentucky. For reservations and information, call the box office at 859-236-2747 or go online at www.pioneerplayhouse.com.