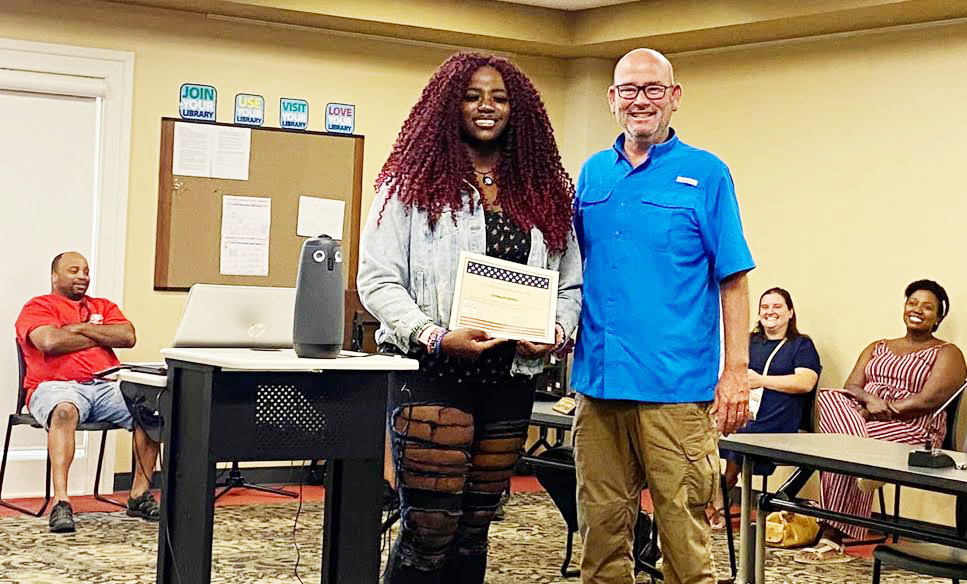 STANFORD – There was a special guest recognized during the Stanford City Council meeting last week.

Stanford Mayor Dalton Miller introduced Lincoln County High School state track and field champion Germani Crosby as “G-Money” during the meeting, a nickname that she said came from her grandfather. 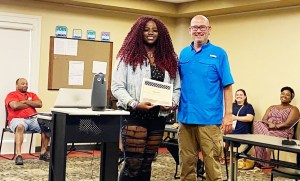 “We’re proud to have you here,” Miller said. “It’s not every day we have a state champion here.”

Crosby, who will be a freshman in August, won the Kentucky High School Athletic Association Class 2A shot put championship during her eighth-grade year.

“At first when I started, I really didn’t know what I was doing. I was just trying something out since my sister was into track, and then I found track and field,” Crosby said. “My mom was like, ‘I think you would be great at this. I see the potential that you have.’ ”

Crosby said she and her mom walked down to the field to speak with the coaching staff, and that’s when it all started.

“First day of practice, got the shot put and almost threw my arm out; it was terrible. I hated it. I really didn’t want to do it again but I was like, ‘just got to get used to it,’” she said.

But she kept at it and eventually got the hang of things, Crosby said.

Despite being nervous, she surprised herself during her first track meet.

“When I started throwing at least 30 (feet) and up I knew I could see myself going to state, or at least if I tried enough I could go to state,” she said.

In her first year going to state Crosby qualified for both shot put and discus for middle school and high school.

“My middle school year I got second for middle school, and I did not place at all in discus,” she said. “Then in high school I got eighth in shot put.”

After long practices, weight-lifting and drills, Crosby went back to state this year at UK, and her hard work paid off.

Crosby went on to place first in middle school for shot put with a throw of 38 and second in discus.

She then placed first in shot put in the high school competition with a toss of 38-7¾.

“It just made me realize how much I can complete within a year or within every track season,” she said. “It’s just been a very great experience for me, mentally and physically,” Crosby said. “I’m so glad that my mom introduced me to shot put and discus.”

In two weeks, Crosby will head to North Carolina to compete in the Junior Olympics.

She was presented a certificate on behalf of the City of Stanford for her accomplishments.

In other business, the Stanford City Council:

• passed the first reading of an amended budget for the 2021-22 fiscal year;

• discussed projects to be completed using Municipal Road Aid funds. Miller said he spoke with the District 1 Magistrate and the city and county will be sharing the cost to complete the blacktopping of Turkey Foot and Sherwood roads. They also discussed blacktopping the two gravel streets in the city by next year.

The proposed roads to be completed this year include: Cherokee, Valley, John and North 2nd Streets, Pettus Court and Maxwell Streets. The city intends to patch Anderson Heights, Kids Fort and Helm Street;

• heard from Police Chief Zach Middleton about the departments’ need for a new vehicle after a cruiser was wrecked. Insurance will cover about $16,500. They have not been able to find a used vehicle so far, Middleton said. Miller said he priced a new Durango with steel wheels at $34,971. Last year they were $28,740, he said. The council agreed to bid the new vehicle.

• announced the citywide yard sale which will begin Thursday, July 28 and end Saturday, July 20, no permits are required.