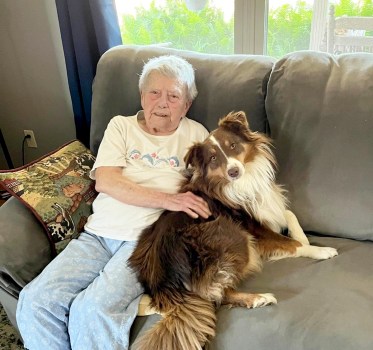 Theresa De Lima calls Beau her little hero, after the border collie alerted her family that she had fallen. Photo submitted. 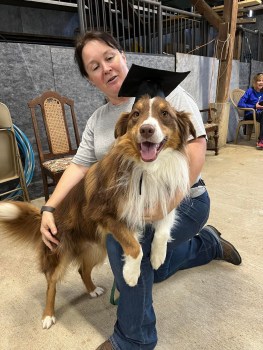 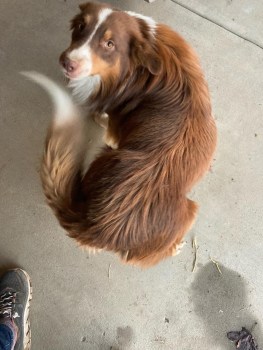 Beau showed up on the De Limas’ front porch in Harrodsburg after he’d been seen running around in Burgin. Mary De Lima said his fur was terribly matted and he was so skinny that his ribs poked out. Photo submitted. 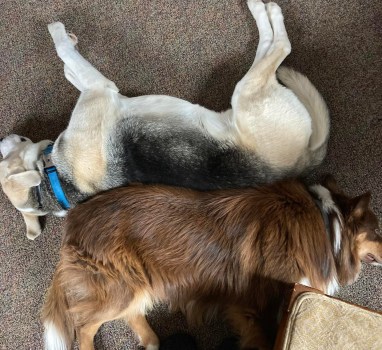 Beau fit in nicely with Mary De Lima’s family. Here, he sleeps next to Watson, another rescue dog of the De Limas. Photo submitted.

Mary DeLima would often see a dog out running around Burgin; he seemed to be a stray border collie. Little did DeLima know the dog would not only become a part of her family, but help save her mom’s life.

“He’s so beautiful,” DeLima says about Beau. But he wasn’t when he first came to the DeLimas. They had seen him running the roads for a while.

“Then we saw him on Jan. 10, and it was 3 degrees out, and he was running around in Burgin, all over the place. He had probably been around since the end of September or October — it was quite a bit of time that he was on the run. So I really thought he was going to get hit.”

When they got home from running errands that day, there he was, sitting on their front porch.

He was skinny and filthy. His fur was matted and his ribs were showing.

“We brought him in and fed him, then called animal control and asked ‘what do we do with him?’”

DeLima says they asked, “‘Do you want him?’ And we thought about it. We did just lose Bruno, our other dog. So they put Beau on a website and advertised him as a lost dog for two weeks, and if no one claims him, they said, he’s yours.”

No one claimed Beau. So he was taken to the groomers and fed regularly, gaining about 15 pounds. “He looks amazing,” she says.

DeLima says the vet thinks he’s about 2 years old, and is definitely a border collie. He actually looks to be a Sable, which is one of the rare types with a tan coat that has black tips on each hair.

“He’s kind of a quiet dog, doesn’t bark much,” she says, but he did one day. “It’ll be three weeks tomorrow, on a Thursday, that he saved my mom.”

DeLima owns and operates DeLima Stables, an equestrian center in Harrodsburg. Her home is also located on the grounds of the center, where her mom Theresa lives with her.

“She’s 91 and goes walking. She had gotten a good report from the doctor. He told her to go out and enjoy the beautiful weather, and she overdid it.”

As her mom got back from her walk, headed back up the long driveway to the house, she fell. But DeLima was out on the property, where horses are boarded and activities like riding lessons and other trainings are happening.

“I was in the arena teaching, I had parents and kids out here so there was a lot of noise, and nobody heard her screaming or hollering.”

“Beau kept running over to me at the corner of the arena, where he could see me. Then he’d run to the far end, where she was and bark, then run back over here and bark.”

It was very strange behavior for him since he was mostly quiet and had become accustomed to all the goings-on at the center.

After Beau had made the same pattern, barking at the same time on each trip, “We said what in the world is bothering him?”

Then one of her students saw DeLima’s mom, laying in the driveway. “Her oxygen had dropped to 88 and she was shaking so bad, laying there in the hot weather.”

They got Theresa up and into a car with the AC blasting. After about 20 minutes in the cool, hooked up to oxygen, she began to stabilize.

But Beau was still not happy with the situation.

“He kept barking, until we got her into the house and put her in the chair. Then as soon as that happened, the dog was like ‘OK, she’s back where she needs to be.’ And he stopped.”

Beau loves her mom, Delima says. “Every morning when I give Mom her pills, Beau is right there, and he gives her these tiny, feather-like kisses on the face.”

He’s turned out to be an incredibly smart dog, and a really good one. She says they haven’t had any trouble out of Beau, at all.

“Well, my mom had made a peanut butter and jelly sandwich and put it on her walker, turned back and he had stolen it …” she says and laughs, but that she can’t really get mad at that. “He loves how much we eat.”

Beau did have a hard time paying attention to commands when he first came around. But DeLima says after obedience classes with trainer Cheri Carbone, “now he comes and he’s really good with his recall.”

Breaking stereotype of a ‘rescue’

“It’s really special, what that dog did that. And it’s good for people to know that it doesn’t have to be raised by you from a puppy for them to be that loyal …” Carbone says. In her 50 or more years working with dogs, it’s obvious to her they actually know they’ve been rescued.

“They feel like they owe you, and they’re very devoted.”

It’s quite the opposite, she says. “That’s pretty much never the case. It’s usually something with the humans — a divorce or they’re moving, and the dog suffers.”

Carbone says she has personally experienced the immensely strong bond a dog can create with an owner who rescued it. Talk to anyone who has raised puppies as well as taken in a rescue, she says, and they’ll tell you the rescues are much easier and oftentimes more devoted.

“And I’ve done both. When we raise them from puppies, we overindulge them, just like we do our kids. Quite honestly, they’re just not as grateful.”

DeLima says they are very happy Beau made it to their home; he’s a member of their family. And although he has been since day one, he’s really earned it, she says.

“Mom was so happy, after she felt better. She just kept hugging him. She calls him her little hero.”