Stanford honors those who died for independence 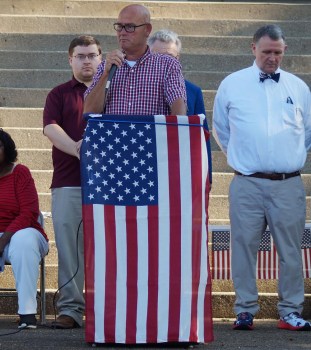 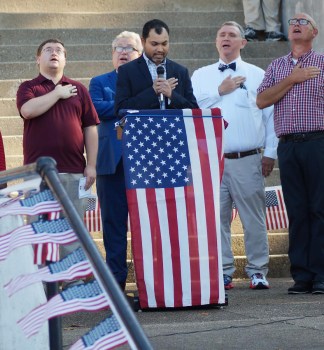 Alpesh Patel leads the group in the Pledge of Allegiance during Stanford's July 4th ceremony. Photo by Abigail Roberts 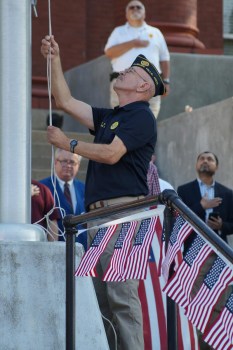 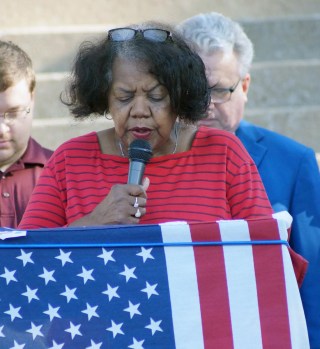 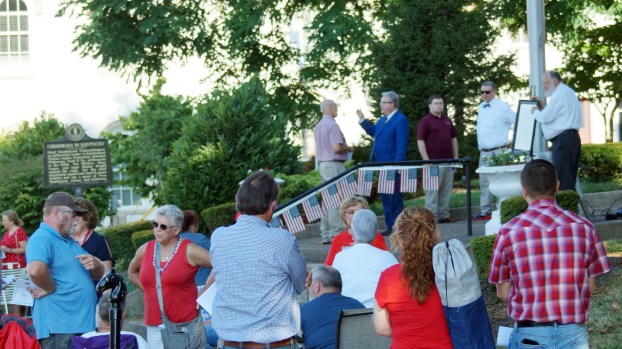 A group gathers on the Lincoln County Courthouse steps Monday as the City of Stanford hosted the reading of the Declaration of Independence. Photo by Abigail Roberts 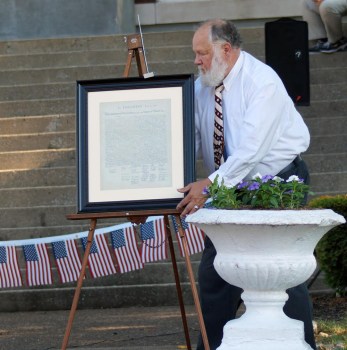 Gary Clough sets up the display of the Delcaration of Independence. Photo by Abigail Roberts 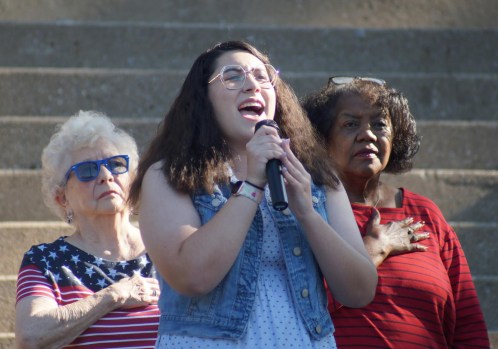 STANFORD – The names of those Kentuckians who died in defense of freedom were read aloud Monday morning on the Lincoln County Courthouse steps as the Declaration of Independence sat on display.

Stanford held the third annual reading of the Declaration of Independence with many local officials on hand to read the name of those Lincoln Countians who fought and died in the American Revolution as well as the War on Terrorism.

The ceremony began with the raising of the American Flag by Ron Hunkins, followed by the Pledge of Allegiance read by Alpesh Patel. Gentry Osbourn sang the National Anthem.

“We will be reading the names of all of the Revolutionary War soldiers that helped us establish independence,” Stanford Mayor Dalton Miller told the crowd.

“They’re the reason that we have the Declaration today,” Miller said. “They’re the ones who stepped up when a new, infant country was being formed and they all were willing to give their life for that sacred document sitting there on that tripod.”

Following the reading of those names, Gary Clough read “Sacred Honor: The Immortal 56,” which describes how the lives of the Founding Fathers proceeded following the signing of the Declaration of Independence.

The 121 Kentucky lives lost in the fight for freedom since the start of the War on Terrorism were also honored Monday morning.

“The next reading of names is the continued sacrifice for our Constitution in the War on Terrorism,” Miller said. “It’s something that a lot of people have forgotten about, something that people don’t realize how many people are still sacrificing every day. The next 121 names that you’ll hear are all Kentuckians. They all gave their life for that sacred document since March of 1991.”

Miller shared a few words before closing the ceremony.

“In closing, I just want to thank everybody for coming out for what I think is a great opportunity to show our allegiance to America and to show that that document, and all the lives that have been sacrificed since the beginning to now, have all been worth it – and we will not let that document die,” Miller said.