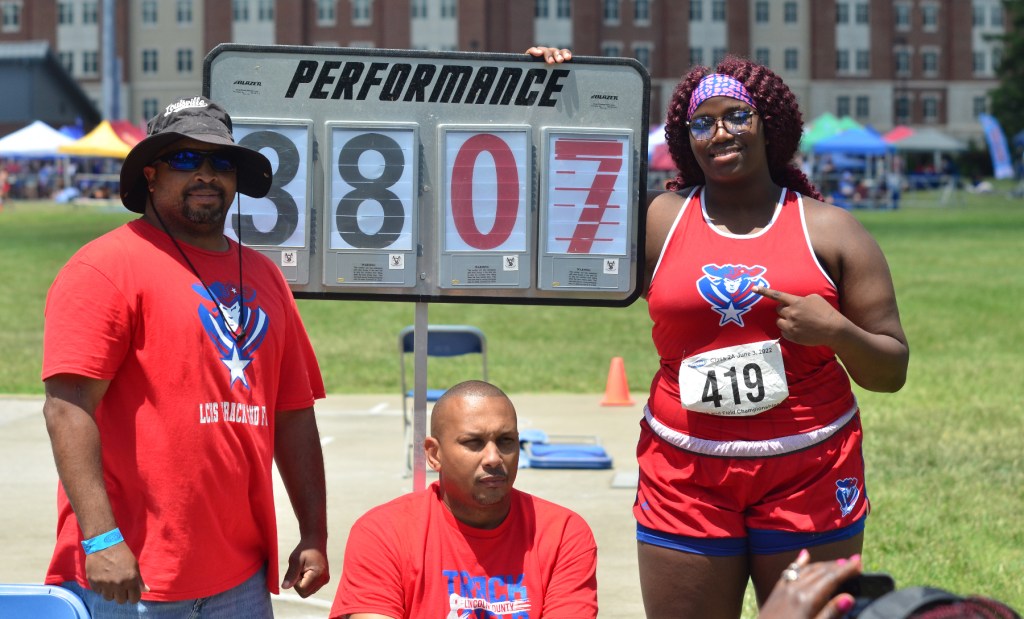 Lincoln County eighth grader Germani Crosby and her coaches celebrate her win in the Class 2A shot put at the state track and field championship Friday in Lexington. Photo by Mike Marsee

LEXINGTON — One of the best high school shot putters in Kentucky isn’t even in high school yet.

Germani Crosby, who finished her eighth-grade year only days earlier, won a state championship for Lincoln County in the Class 2A girls shot put June 3 at the state track and field championships at UK.

The victory capped a season of significant progress for Crosby, who threw the shot and discus for the first time last season.

“It means that I can accomplish my goals, because my goal last year, whenever I started throwing, it was just to get the hang of it, and (this year my goal) was to hit a mark and then press on from that mark,” Crosby said.

Lincoln County eighth grader Germani Crosby and her coaches celebrate her win in the Class 2A shot put at the state track and field championship Friday in Lexington. Photo by Mike Marsee

Crosby, making her second appearance in the state meet before her first day of high school, is the only middle-schooler to win an individual event and one of only three to win a gold medal at this year’s state meet.

Her top throw of 38 feet, 7¾ inches came on the second of her six attempts at the University of Kentucky, and she won the competition by just more than 3 feet.

“From the first meet (this season) I set a PR at 38-1, and during the season I’ve been able to be consistent with keeping it above 37 (feet),” Crosby said. “Now just being able to keep it at 38 and knowing I can go above has been really good.”

Crosby was introduced to the discus by her mother, who threw in high school, and she said once she started throwing the discus it wasn’t long before she discovered the shot put.

“I love the feeling of throwing a weighted ball out into the field and knowing that not everyone can do it,” she said.

She said she also enjoyed the feeling of winning an event that eighth-graders don’t typically win.

Crosby’s top throw Friday broke her own school record. She first broke the school shot put record last season, and she also holds the school record in the discus at 113-3.

She finished 14th in the discus at the state meet.