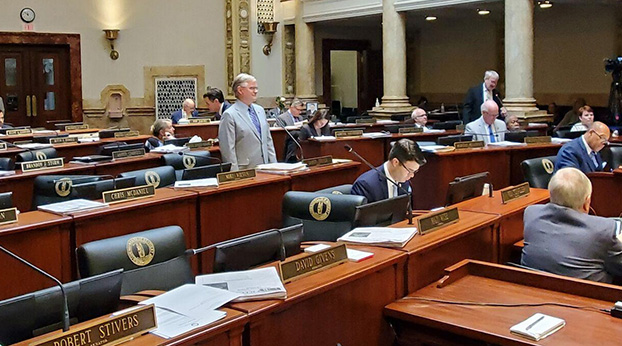 Senate lawmakers at work on the next-to-last day of the 2022 General Assembly session. (Kentucky Today/Tom Latek)

FRANKFORT, Ky. (KT) – Gov. Andy Beshear vetoed some two dozen bills passed by the General Assembly during the last two days before their 10-day veto recess, and when lawmakers returned on Wednesday, they began voting to override the bills, one by one.

Both chambers must approve the override, starting in the chamber where the bill originated but, unlike in Congress, where a two-thirds majority in both the House and Senate is needed, a simple majority is all that’s required in Frankfort for the measure to become law.

Among the high-profile Senate bills:
Senate Bill 1, sponsored by Sen. John Schickel, R-Union, would shift many school governance decisions to local district superintendents, such as curriculum and principal hirings, taking it away from the school-based decision-making councils, which were created by the Kentucky Education Reform Act.

It was changed to include provisions of SB 183, sponsored by Sen. Max Wise, R-Campbellsville, dealing with civics education, designating a set of historic documents and speeches into the classroom, in response to the critical race theory national debate.

Senate Bill 83 is called the Fairness in Woman’s Sports Act, by its sponsor, Sen. Robbie Mills.

The measure would bar transgender girls and women from playing on sports teams matching their gender identity from sixth grade through college.

Supporters say it would ensure girls and women compete against other biological females.

It would also direct the Kentucky High School Athletics Association to develop regulations requiring schools that participate in interscholastic athletics to designate all athletic teams, activities and sports based upon the biological sex of the students eligible to participate according to their birth certificate, and prohibit male students from participating in athletic teams, activities and sports designated as “girls.”

Mills said although the KHSAA already has a regulation on the subject, “many believe there are flaws in this regulation that could ultimately lead to a female high school athlete competing unfairly with a biological male.”

University of Kentucky swimmer Riley Gaines was at the Capitol to witness the vote on the legislation. Gaines is a four-time SEC champion and All-American student-athlete. Gaines also served two years as UK’s team captain and was an Olympic trials qualifier in both 2016 and 2021.

She recently tied for fifth place against Lia Thomas in the NCAA 200 meter freestyle competition. Thomas, a fifth-year swimmer with the University of Pennsylvania, won the 500 meter freestyle race in March, becoming the first transgender NCAA champion in Division I.

“I know I speak for the majority of female athletes across every NCAA sport when I say biological males should not be competing against women,” Gaines said. “It’s crucial for the NCAA to open its eyes and recognize the irrefutable damage being done to everything Title IX stands for: equity, fairness and creating opportunities for women to succeed at an elite level and in life.”

State law currently allows local school boards to serve as authorizers for charter schools, but if they deny it, applicants can appeal to the Kentucky Department of Education, and that continues. The only change for authorization is that the applicant can ask the KDE for technical assistance on the application, if it is denied. Local boards in districts with less than 7,500 students have an absolute veto power, if they don’t sign a memorandum of understanding with an applicant.

Here’s something on two others.

In the Senate Sen. Morgan McGarvey, D-Louisville, called it a cruel bill. “This bill will hurt Kentucky families. It will hurt Kentucky kids, seniors, children with disabilities. It’s going to disproportionately affect portions of the Commonwealth that lack access to health care food, child care, and the assistance Kentuckians depend on.”

After earlier clearing the House, the Senate voted to override the veto 28-9.

House Bill 8, sponsored by Rep. Jason Petrie, R-Elkton, would reduce the state income tax by 1 percent, with possible future decreases based on state revenue rises, and could reach zero.

Senate President Robert Stivers, R-Manchester, said, “People are moving to states that are reducing personal income taxes. Those are the states you are seeing grow.”

It cleared the House earlier, and was approved by the Senate, 28-8, with one “pass” vote.