Pats prepare for J-Town in state tournament opener;
A look at each school’s KHSAA history 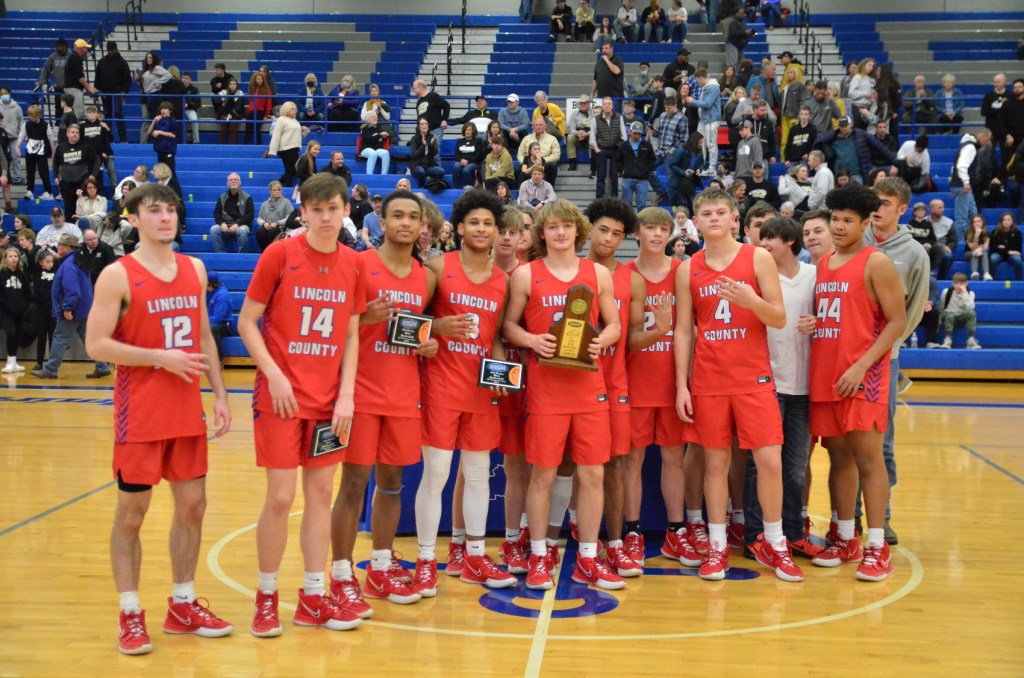 It’s easy to see the differences between Lincoln County and Jeffersontown, but there are some significant similarities in the two teams that will meet Wednesday in the opening game of the Boys Sweet 16.

Capable of locking down opponents on defense. Able to score in transition but willing to set up an offense. Several scoring options. Players who complement each other.

Lincoln coach Jeff Jackson and his staff have studied Jeffersontown intently for the past few days, and Jackson said those traits and others could present problems for the Patriots when they take the floor at Rupp Arena.

“They do so many things well, and they complement each other very, very well,” Jackson said. “It’s going to be a great challenge, but we’re looking forward to it.”

J-Town (24-8) comes into its fifth state tournament — and its first since moving to the 6th Region in 2011 — on something of a defensive roll. The Chargers are allowing 55.9 points per game, which is pretty good, but they have held their five postseason opponents to an average of 41.2 points.

“They defend really, really well,” Jackson said. “They’re very quick and long and they’re athletic, and they do a really good job of communicating. They’ll switch stuff up and play a lot of good defenses.”

Defense also has been a calling card for Lincoln (29-7), whose average of 48.9 points allowed per game is seventh-best in the state and second-best in the Sweet 16 field.

Lincoln will try to contain a J-Town offense that has both multiple threats and multiple ways to score.

“They pass well, they run when they can get out in transition, and if not, they do a good job of backing it out and running their stuff,” Jackson said. “They’ve got four or five guys that can really score.”

Three Chargers have double-figure scoring averages, led by brothers Drae and Will Vasser, both of whom average 13.6 points per game.

“They play eight kids, and they don’t miss much when they sub,” Jackson said.

Junior forward Jackson Sims (6.3) has started for much of the season, and senior guard Clayton Davis (3.8) moved into the lineup after Evan Smith (11.7) was injured in the 12th Region Tournament. Davis’ brother Connor (1.5) has been the only reserve in the regular rotation since Evan Smith’s injury.

One key difference in the two teams is their degree of reliance on the 3-point shot. Their long-range shooting percentages are identical, but Lincoln has over 200 more attempts than J-Town.

Jackson said rebounding also will be a key for the Patriots. No one on either team averages more than 5.1 rebounds per game, but their team averages are very similar.

“We’ve got to rebound against them for sure. They really attack the offensive glass,” Jackson said.

Lincoln does bring one thing to Rupp Arena that J-Town doesn’t have: state tournament experience, if only a little. Jaxon Smith is the only Patriot who played in the 2019 Sweet 16 — he scored a team-high 19 points in their first-round loss to Madisonville-North Hopkins — and he has done his best to prepare his teammates for the state tournament stage.

“(I told them) don’t come in shell-shocked. It’s just like any other game, just in a bigger arena,” he said.

What the Patriots do not have a great deal of is depth. Injuries to Evan Smith and Will Bishop, whose season ended in January, have left them with a six-man rotation.

That could be a problem if they fall into foul trouble, but Jackson said they can’t let that change the way they play.

“We’ve got to play the way we play and go forward with it,” he said. “We’ve got to do the things that got us there.”

On the other hand, they also have to be prepared to go deeper into the bench if they have to.

“We’ve talked to Jalen (Smith) and Trevor (Miracle) and Sawyer and Seth (Horton) about being ready, depending on our foul situation or whether we need to give kids a break here and there,” Jackson said. “They need to be in tune with the game while they’re over there on the bench.

“When we review the other team we have those guys be the scout team, so the younger guys … should know (J-Town’s tendencies) just as well if not better because they’re running J-Town’s stuff.”

Jackson said he’s glad the boys’ state tournament comes after the girls’ tournament this year because it gave Lincoln a few extra days not only to prepare but also to recover.

“With the injuries we’ve had and as physical as our regional tournament was, I think it benefitted us a little bit to get some extra rest,” he said.

Lincoln won its first nine games, then lost four of six during and just after the holidays. The Patriots are 18-3 since a Jan. 4 loss at Pulaski County, which they avenged with their 42-40 overtime win over the Maroons in the regional final.

J-Town was only ninth in the 6th region in preseason rankings by The Cats’ Pause Kentucky Basketball Yearbook, and the Chargers didn’t have anyone ranked among the top 10 players in their region.

But while teams such as Pleasure Ridge Park, Western, and Doss were more highly regarded, J-Town continued to improve against a difficult schedule. The Chargers have wins over 8th Region champion North Oldham, Trinity, St. Xavier, DuPont Manual, Floyd Central (Ind.), and Jeffersonville (Ind.), and they lost by six points to 7th Region champion Male.

A comparison of statistics and other numbers for Lincoln County and Jeffersontown: