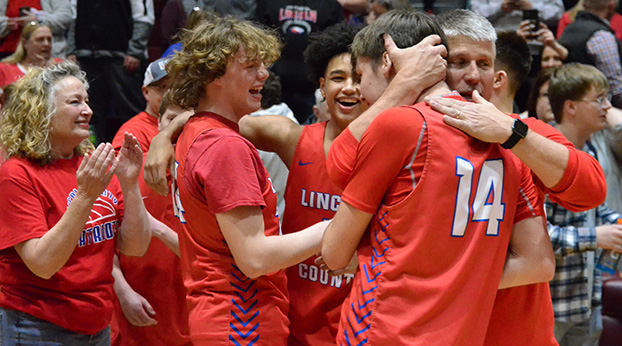 Colton Ralston (14) of Lincoln County gets a hug from assistant coach Shawn Conley after Ralston hit the game-winning shot Tuesday to lift the Patriots over Pulaski County in the 12th Region Tournament championship. - Photo by Mike Marsee

SOMERSET — Colton Ralston is all of us.

Who among us hasn’t dreamed of making that buzzer-beating basket for a championship, or visualized what the next few seconds of celebration might be like?

Ralston lived that dream Tuesday night when he made a shot that would be the envy of any boy or girl who has ever picked up a basketball.

The junior guard recovered a loose ball and released a shot just before time expired that sent Lincoln County to the Boys’ Sweet 16.

His 15-foot jumper gave the Patriots a 42-40 overtime victory over Pulaski County in the championship game of the boys’ 12th Region Tournament and gave him a memory that will last a lifetime.

Ralston said he had never hit a game-winning shot before at any level, but he had imagined the moment just like every young basketball player does.

“Before we came here I was imagining it, so it’s insane,” he said. “It feels a lot better here. Going to the gym every night, you shoot the same shots over and over, but it feels really good right now.”

The scene that followed the shot was one of joyous chaos. Ralston rushed toward the other end of the floor as his teammates rushed toward him and the Lincoln student section stormed the court.

“That’s why we do what we do,” Lincoln coach Jeff Jackson said. “It makes it fun.”

The basket that gave Lincoln (29-7) its sixth regional championship followed a missed shot from the other side of the basket by Lincoln’s Jaxon Smith. Here’s a closer look at how the final seconds played out:

Smith brought the ball over the midcourt line and made a beeline toward the baseline. Pulaski defender Zach Travis stuck with Smith as he moved along the right edge of the free throw lane and contested his shot once he was parallel to the basket.

“Jaxon got to the baseline and made a good strong move and shot one up,” Jackson said. “And we tell our kids sometimes it’s not the shot, it’s the putback, so don’t ball-watch.”

Smith’s shot from the right side was at least a foot over the rim, and Clayton Davis of Lincoln and Carson Fraley and Cayden Lancaster of Pulaski waited for it to come down on the left side.

All three of them went up for the ball, but none of them could get their hands on it. They all fell to the floor, and the ball bounced behind them and right into the hands of Ralston, who had moved in from the left corner.

“We missed a shot, and Clayton hustled to try to get the rebound. He didn’t get it, and I picked it up and shot it,” Ralston said.

Pulaski’s Gavin Stevens was coming in from Ralston’s right, but he didn’t get there in time to contest the shot. Ralston said he saw only one thing when he grabbed the ball and set his feet.

Smith saw it all from the other side of the lane.

“I saw (my shot) go over the rim and I saw it get tipped to Colton. As soon as Colton shot it I knew it was going in,” Smith said.

The buzzer sounded after the ball left Ralston’s hand but before it fell through the rim.

“The ball bounced Colton’s way and he didn’t hesitate to put it in the air,” Jackson said. “I knew it was good when it left his hand, and I knew it beat the clock.”

So did Jackson Sims, who was farther away from the play than any other Patriot on the court but had a good view of the entire play.

“I was at halfcourt ready for (Pulaski) to go back (the other way), because I did not think Colton had that shot,” Sims said. “But then when he released it I knew it was going in, so I was already celebrating with about a second left.”

It wasn’t long before he had plenty of company as the celebration moved toward him.

“Good Lord, it was crazy,” Sims said. “I saw the whole pep section running at me, the team, I got tackled.”

Shooting is second nature for Ralston, who has the green light from Jackson to fire at will. He is the team’s best and most prolific 3-point shooter — he has made 39 percent of his 226 attempts from behind the line — and is second on the team in scoring at 13.1 points per game.

Now he and his teammates will take aim at the Rupp Arena rims. Lincoln will play 6th Region champion Jeffersontown (24-8) at 11 a.m. March 16 in the first round of the Boys’ Sweet 16.

But in the aftermath of the Patriots’ win and the resulting pandemonium, Ralston said he couldn’t yet wrap his mind around what it meant to hit the shot of a lifetime.

“It’s not sunk in yet,” he said. “I’m going to be feeling good for a while, but then we’ve got to get ready for Wednesday.”