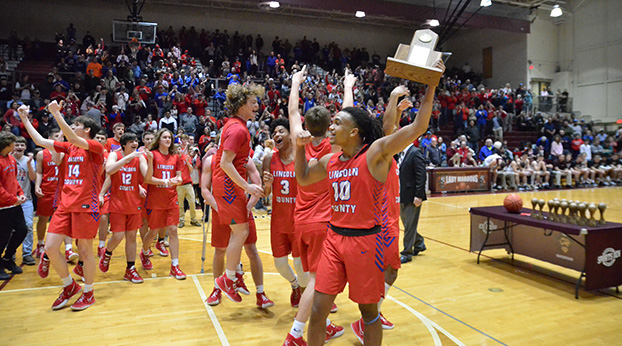 SOMERSET — So many reasons were riding on a single shot.

The Lincoln County Patriots had multiple sources of motivation in their pursuit of a 12th Region championship, and they were all appeased the moment Colton Ralston’s shot slipped through the net Tuesday night.

In that moment, the Patriots proved they were good enough, avenged a loss in the same game last year and struck a blow for fallen teammates as they seized a spot in the Boys Sweet 16.

In the next moment, they went crazy.

A buzzer-beating jump shot by Ralston gave Lincoln a 42-40 overtime victory over Pulaski County in the boys 12th Region Tournament championship, igniting a boisterous celebration by the Patriots and their fans.

“It’s a great win for our kids and our school and our community,” Lincoln coach Jeff Jackson said.

Lincoln won its first regional title in three years, completing a quest it could not finish a year ago when it lost in the finals.

“Coming so short and losing it last year, it hurt really bad, and to win it this year feels really good,” Ralston said.

Athletes find motivation wherever they can, and Lincoln’s players found plenty of it on the way to the regional final at Pulaski. In fact, they wore some of it around their necks Tuesday in the hours before the game, breaking out the runner-up medals they received after their narrow loss to Boyle County in the 2021 title game in their own gym.

“It was motivation every game,” Ralston said. “We have medals in our locker room that say, ‘12th Region Runner-Up,’ and we wore them around school today thinking we were going to get the win tonight.”

Those medals may never be seen again, but they served a purpose for the Patriots.

“It’s something that they’ve talked about as a team, unfinished business,” Jackson said. “We didn’t take care of business on our own floor last year. They were hungry, and … we talked about getting it done this year. They kept that focus all year, and it paid off in the end for us.”

Lincoln avenged a 51-46 loss at Pulaski on Jan. 4, which was the fourth loss in six games for a team that had started 9-0.

“Not a lot of people saw us here in the middle of the season,” Lincoln forward Jackson Sims said. “We had some ups and downs, but we never lost faith. I felt like if we got here, we had a chance to do something special.”

That was another source of motivation for Lincoln.

“Most of the season after got beat by Pulaski we were the underdogs (in the region), and that gave us more motivation,” guard Jaxon Smith said.

The Patriots also were fueled by a loss to Pulaski in the first round of the 2020 regional, as well as the loss of teammates Evan Smith, who suffered a season-ending injury in their first-round win last week, and Evan Bishop, who played in only seven games before an injury shortened his season.

“We’ve got great kids in our program,” Jackson said. “They’ve handled some adversity and some injuries. They’ve overcome some things.”

Lincoln was driven by defense, as is so often the case. The Patriots held Pulaski (30-3), which averaged better than 73 points per game, to 16 points in the final 20 minutes of play.

Pulaski was 5 for 19 overall from the field and 1 for 7 from 3-point range after halftime after hitting 10 of 19 shots in the first half.

“I thought our defense was good. We thought we’d have to play more zone, but we were able to man and do some things. I thought we battled and fought hard,” Jackson said.

Still, the Maroons rallied from a 37-33 deficit to force overtime, tying the game on two free throws by Zach Travis with 51 seconds left in regulation.

Ralston hit a 3-point shot from the left side to give Lincoln a 40-37 with 1:37 left in overtime. Each team turned the ball over once before Pulaski tied the game with 21 seconds to play on a 3 by Travis, who also drew a foul but missed his free throw to set the stage for the thrilling finish.

Jaxon Smith dribbled the ball down the right side of the lane and got close to the basket but shot the ball over the rim. No one could corral the rebound and the ball bounced to Ralston, who shot from 15 feet out as a near-capacity crowd held its collective breath.

“It was a heck of a high school basketball game,” Jackson said. “We tell our kids that’s why you play, to get a chance to play in this atmosphere.”

Ralston took the only two shots in overtime for Lincoln, which was 5 for 20 from the field after halftime and shot 16 for 44 and shot 36 percent overall.

He finished with 10 points, while Tramane Alcorn led the Patriots with 12.

Clayton Davis had eight rebounds, Sims had seven and Alcorn had six as Lincoln outrebounded Pulaski 30-25.

Both teams led by as many as five points in a relatively fast-paced first half. The pace slowed considerably in the third quarter, when each team had only one basket and the Maroons outscored the Patriots 5-3.

Lincoln took a 33-31 lead with 5:27 left in the fourth quarter on a three-point play by Clayton Davis and never trailed again on the way to its sixth state tournament appearance and its second in the past four seasons.

Jaxon Smith is one of two Lincoln players who were on the 2019 championship team and the only one who played in the Patriots’ first-round loss to Madisonville-North Hopkins in the Sweet 16, and Sims said Smith tried to impress upon his teammates what it meant to do that.

“Jaxon really preached to us how special it was before the game and we really wanted to get there, and tonight we accomplished it,” Sims said.