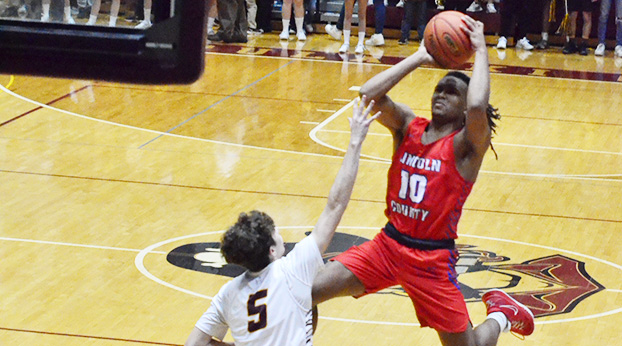 Jaxon Smith (10) of Lincoln County goes up for a shot over McCreary Central’s Noah Loudermilk during the third quarter Monday. - Photo by Mike Marsee

SOMERSET — Lincoln County took care of business to take its place in the regional finals.

The Patriots have a little less depth but still had more than enough going for them to push past McCreary Central for a 69-49 win Monday night in a boys 12th Region Tournament semifinal at Pulaski County.

Lincoln was effective on both ends of the floor as it overcame the loss of a key player to advance to the regional title game for the second consecutive year. 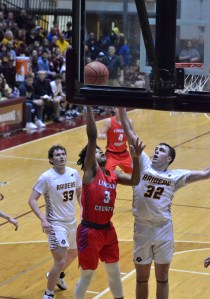 “I thought we played really hard and I thought our effort was good,” Lincoln coach Jeff Jackson said. “We were pretty focused on the defensive end and took care of the ball and did some good things on offense.”

Lincoln (28-7) won for the 11th time in 12 games to secure its spot in the finals for the third time in four years.

The Patriots will play host Pulaski County (30-2) at 7 p.m. Tuesday for the championship and a berth in the Boys Sweet 16.

“They’re well-coached, they’re very strong, very physical, and they beat us down here earlier in the year on their floor,” Jackson said.

Jaxon Smith and Tramane Alcorn scored 18 points each and Jackson Sims added 16 in a semifinal victory that allowed Lincoln to match the school record for wins in a single season, surpassing the 1980 and 2008 teams that won 27 games each.

The Patriots won without guard Evan Smith, who will miss the rest of the season after suffering a torn meniscus, a strained anterior cruciate ligament, and a strained medial collateral ligament Wednesday in the closing seconds of their first-round win over Rockcastle County.

Evan Smith’s injury pressed brothers Clayton and Connor Davis into larger roles. Clayton Davis, the only reserve who has played meaningful minutes in most of the second half of the season, moved into the starting lineup and Connor Davis was first off the bench.

Clayton Davis scored eight points in the first half but fell into foul trouble, and Connor Davis played more minutes than he probably expected.

“Connor Davis stepped up on our bench tonight and gave us a big lift,” Jackson said. “He was next up, and he really stepped up and did a good job on both ends of the floor for us.”

Lincoln has been effective in going to the basket in the postseason, and the Patriots did that again Monday to beat McCreary (17-12) for the second time this season.

“We handled the pressure pretty well and did some good things on the offensive end, taking care of the ball and attacking the basketball. We moved the basketball really, really well, and we’ve got to continue to try to do that.”

The Patriots shot 56 percent from the field and were 9 for 20 from 3-point range, and they turned the ball over only three times. 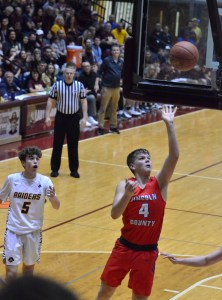 Jackson Sims (4) of Lincoln County gets past McCreary Central’s Noah Loudermilk for a layup during the fourth quarter Monday. – Photo by Mike Marsee

They scored nine straight points to take a 31-19 lead on a 3-pointer by Sims with 1:01 left in the first half.

Alcorn scored seven of Lincoln’s 14 points in the third quarter, including six during an 8-2 run that put the Patriots up 45-30.

McCreary made one last push with six answered points that trimmed the margin to eight, but Lincoln finished the Raiders off in the fourth quarter with a run of 11 straight points — seven of which came from Sims — that made it 56-37 with 3:23 remaining.

McCreary’s Kyle Stephens scored 15 points in the second half and led the Raiders with 19 points on 9-of-23 shooting.

“They did a really good job on him and made it tough on him. He had 19, but he had to earn some of them,” Jackson said.

Lincoln now turns its attention to a rematch with Pulaski, which defeated the Patriots 51-46 on Jan. 4.

The Patriots shot just 27 percent from the field in that game, and they fell behind by as many as 14 points in the third quarter.

The Maroons, whose only losses this season are to North Laurel and Boyle County, entered the tournament shooting 49 percent from the field and averaging 73.4 points per game.

Senior Gavin Stevens, who scored 26 points Monday in their 59-51 semifinal win over Boyle, averages 16.0 points per game and is closely followed by Zach Travis (15.7) and Cayden Lancaster (14.6).

“They’ve got a heck of a basketball team. They’ve got a lot of pieces,” Jackson said. “They’ll be a challenge.”

Pulaski is in the finals for the first time since 2017, when it won its most recent regional title. Lincoln will be trying to win its first title since 2019.

The Patriots and Maroons have met in the regional final twice before, with Lincoln winning in 1975 and Pulaski winning in 1986.