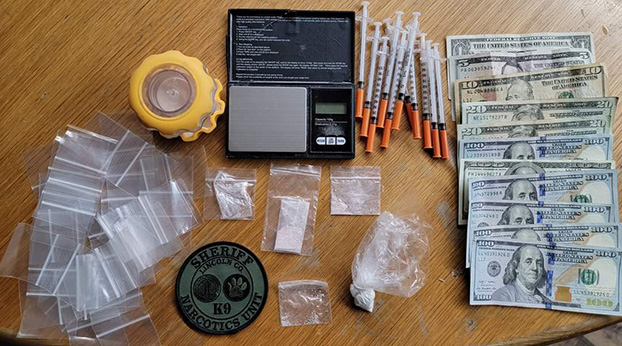 According to arrest records, Brian Trailer, 39, and Heidi Young, 46, both of Waynesburg, were arrested, as well as Ashley Robinson, of Hazard, who had four active warrants out of multiple counties for her arrest.

Janet Wyatt, of Stanford, was also arrested on shoplifting charges after fleeing to the same residence where the search warrant was being executed.

According to the Lincoln County Sheriff’s Office, on the way to execute the search warrant at a residence located on Ky. Hwy. 1247, Loop 2, deputies were dispatched to the Dollar General on U.S. 27 South for a reported shoplifter.

By the time deputies arrived, the suspect had fled the store and traveled to the same residence where deputies were going to conduct the search.

As deputies arrived, Wyatt was exiting her truck, according to K9 Sgt. Michael Mullins.

She was arrested and charged with theft by unlawful taking (shoplifting).

Deputies executed the search warrant at the residence at about 9:30 p.m. on March 3 and located approximately 4.2 grams of suspected heroin/fentanyl, a digital scale, pill crusher, several used and unused hypodermic syringes, $656 in cash and several clear plastic baggies.

There were two children present at the home during the search, including a two-year-old and a 10-year-old.

According to the Sheriff’s Office there were several uncapped used hypodermic syringes that were easily accessible to the juveniles.

Social Services were immediately notified and responded to the scene to assist in the investigation.

Trailer, who lives in the home, was arrested and charged with possession of a controlled substance (heroin) after deputies located “pinkish substance that resembled heroin” inside of a backpack in the kitchen, according to the arrest citation.

The backpack had a wallet inside of it that contained cards with Trailer’s name on them. He was also in the kitchen at the time of the search, the citation states, and he had a hypodermic needle on his person.

Trailer also had an active warrant for his arrest out of Lincoln County.

Young, who also lives in the home, was arrested and charged with trafficking in a controlled substance (heroin), endangering the welfare of a minor and possession of drug paraphernalia.

According to the arrest citation, deputies located “Pinkish substance that resembled heroin” inside Young’s master bathroom, along with several empty baggies and hypodermic syringes.

In another bedroom, deputies located digital scales and a baggy containing a “fine, white powder.”

Young had about $600 in U.S. currency in her purse, according to the citation.

K9 Sgt. Michael Mullins is the leading investigator of the case. He was assisted in the arrests by Constable Eddie Brown and Lincoln County Sheriff’s Deputies McIntosh, Price, Mullins, Phillips, Taylor, and Cloyd.