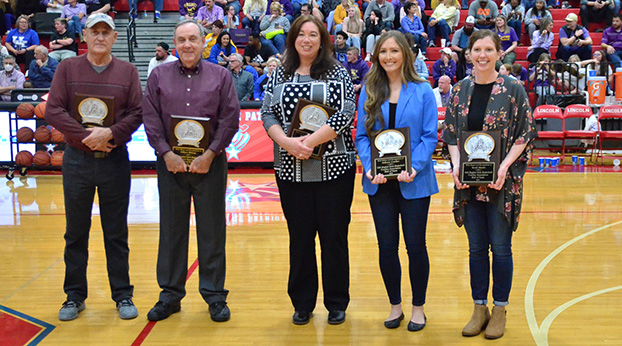 Five individuals were inducted into the 12th Region Girls Basketball Hall of Fame on Friday at Lincoln County. The honorees were Ken Hurt of Garrard County, Gilbert Wilson of Eubank and Pulaski County, Wendie Austin-Robinson of Burgin, Adison Corder of Southwestern and Tarah Combs-Muntz of Pulaski. They were joined by the 1995 Pulaski team. - Photo by Mike Marsee

STANFORD — One player and one coach from local schools were inducted into the 12th Region Girls Basketball Hall of Fame on Friday.

Wendie Austin-Robinson of Burgin and Ken Hurt of Garrard County were part of a class of five individuals and one team recognized at the girls 12th Region Tournament at Lincoln County.

She went on to play for Centre College, where she was named an All-American in 1994 and was twice named Southern Collegiate Athletic Conference Player of the Year. A four-year starter on teams that won four consecutive conference championships, she ranked third in school history in points and first in rebounds when her Centre career ended.

Austin-Robinson has been the head coach at Centre since 2005 and has been named a conference coach of the year three times.

His teams won 12 district championships and made 23 regional appearances, and they won two 12th Region All “A” Classic championships. He finished his career with a 443-274 record.

Hurt was elected to the Garrard County Board of Education in 2020.

Austin-Robinson and Hurt were joined in the hall of fame class by former players Tarah Combs-Muntz of Pulaski County and Adison Corder of Southwestern, contributor Gilbert Wilson of Eubank and Pulaski and the 1995 state runner-up Pulaski team.