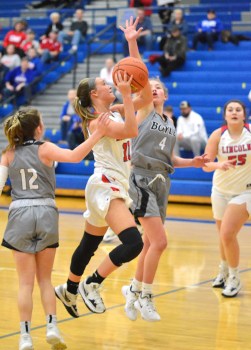 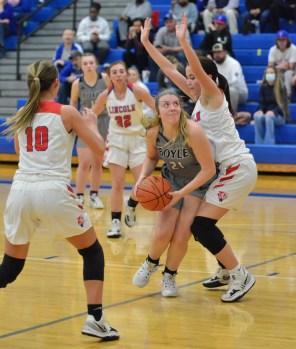 Ella Coffey (21) of Boyle County looks for a shot in the lane against Lincoln County’s Chloe Ralston during the third quarter Monday. - Photo by Mike Marsee 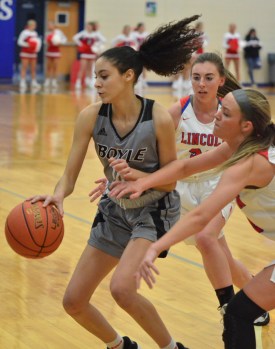 Turnovers or no turnovers, the Lincoln County girls are still alive.

Twenty-three turnovers might be fatal in many postseason games, but the Lady Patriots overcame that total Monday night to defeat Boyle County 43-33 in the first round of the 45th District Tournament at Danville.

They hit nearly half of their shots and halted a fourth-quarter charge by Boyle to post their first three-game winning streak of the season and their first postseason win in three years.

So while coach James Jackson certainly wasn’t pleased with Lincoln’s turnover total, he was happy to look at the bigger picture.

“I am terrified to see how many (turnovers) we have,” Jackson said. “But we fought. This time of year you advance and you take it.”

Lincoln (12-19), the No. 4 seed in the five-team field, advanced to a semifinal against top-seeded Danville at 6 p.m. Tuesday with its third victory over Boyle (11-16) in as many games this season.

The Lady Patriots shot 48 percent from the field and hit 10 of 15 free throws, including six of six in the closing seconds after the Lady Rebels cut an eight-point deficit to four.

“Our kids found a way, and right now that’s what you’ve got to do,” Jackson said.

Boyle got three shots on two possessions to trim the margin to two points after pulling within 37-33 with 2:03 remaining.

Lincoln took its largest lead at 32-24 when Ally Lynn opened the fourth quarter with a layup, but Boyle battled back to cut its deficit in half over the next three minutes.

Boyle coach Ryan Wiersma said that typified the fight shown all season long by a team that played much of the year with only eight players and had no seniors and no size to speak of on its roster.

“Every single game they’ve competed, they’ve gotten better, and we gave ourselves a chance to win this game. We just didn’t make a bucket when we needed to,” Wiersma said. “But this group of girls is tougher than nails. They never stopped competing, they never backed away from a challenge, and I’m so proud of the way they worked this season.”

Zoey Robbins and Peyton Bugg scored 11 points each for the Lady Rebels, who shot 27 percent from the field and had 17 turnovers.

Alexia Baldock had 11 points for Lincoln, which led 10-3 late in the first quarter.

The Lady Patriots turned the ball over eight times in the first 5:15, but Boyle had five turnovers in the same span.

Robbins hit consecutive 3-pointers to start a 9-0 Boyle run before Estes scored all 10 of the Lady Patriots’ second-quarter points to give them a 21-17 halftime lead.

Wiersma said the Lady Rebels will be better for the experience they gained this season. Season-ending injuries to a handful of players who were expected to be key players forced many of those who remained to play different roles than they otherwise might have.

“We had people playing different positions due to injuries, and they’ve learned so much,” Wiersma said. “We put a bunch of people in different situations to try to step up, and at times we succeeded, and hopefully we can focus on our successes going forward.”

Lincoln’s focus is squarely on Danville, and Jackson said the Lady Patriots will have to play better to compete with a team that beat them 62-34 and 55-42 during the regular season.

“We’ll adjust and do what we’ve got to do to get ready for a juggernaut,” he said.