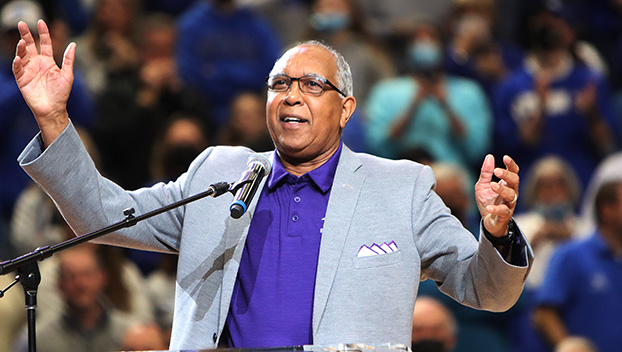 Former Kentucky coach Tubby Smith, who was coaching High Point University, has announced his retirement due to a battle with Covid. - Photo by Jeff Moreland 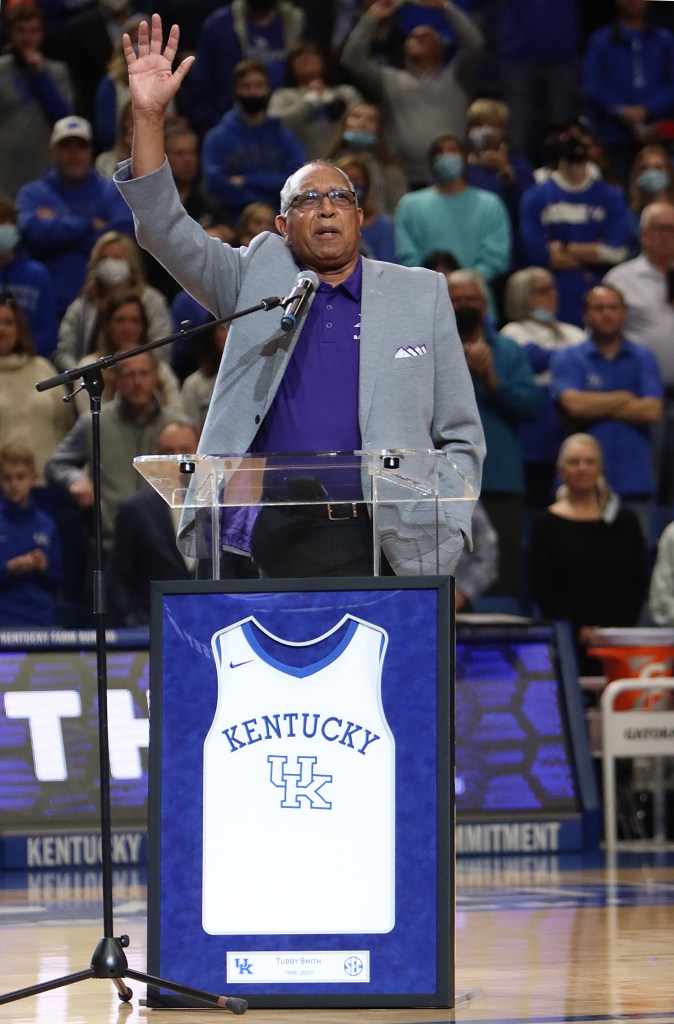 Former Kentucky coach Tubby Smith has announced his retirement after battling Covid. Smith was honored with a jersey retirement when his High Point team played Kentucky in Rupp Arena on Dec. 31. – Photo by Jeff Moreland

Tubby Smith offered no hint at retirement when he returned to Rupp Arena on New Year’s Eve, but did give an early indication the time was possibly near.

“I go back to my pops … raised 17 kids with mom and dad,” Smith said. “He said, ‘Boy, there is going to come a time you’re not going to be able to fight like you used to.’ Stamina. It’s not so much drive.”

At the time, Smith admitted “every coach loves coaching” and was enjoying his tenure at High Point, but added, “in this line the work, it can be taxing. It can change you.

“I mean, Roy Williams, Mike Krzyzewski, all the guys, the guys, the legendary coaches planning on retiring, they would still be coaching, but you can only go so long,” he said. “It’s like a boxer or a basketball player. There is a window of longevity. I’m having a lot of fun here at High Point. We just built a new arena, facility, so I’m excited about that.”

Nearly a month and a half down the road, Smith couldn’t keep pace of the demands of coaching, especially after contracting COVID-19 for a second time. He stepped down on Wednesday, handing the reins to son G.G. Smith, who was the associate head coach. Tubby enjoyed a lengthy coaching career, including a successful stint with the Wildcats, where he won a national title in 1998. He also was head coach at Tulsa, Georgia, and Minnesota.

“I tell our players, you know, it’s what you do from the day you’re born to the day you die,” he said. “My parents taught me, my dad, you never really want to see that gold watch or that retirement award unless you last. Your longevity has its part.”

“I think everyone knows the relationship I have with Tubby and how I respect him like I respected coach (Joe B. ) Hall,” he said in a social media post. “I’m so happy we were able to honor him this year and put a banner up for him in Rupp. Think of the career coach Smith has had — at Tulsa, Georgia, UK, Minnesota, Texas Tech, Memphis, and High Point, he did it with class. Never sold his soul and always stayed true to who he was as a coach and as a person. That’s the greatest compliment that can be paid to anyone.”

That’s the way Smith wanted it to be and never compromised his true convictions as a person on or off the court during his successful career in the collegiate ranks. Smith always considered himself “a servant of every program I’ve ever coached.

“We feel when you do your job, and to the best of your ability, people respect that,” he said. “I think Kentucky, obviously, the folks here and the fans here, we are not just on the basketball court, but serving this community, the state, giving back as much as we could through our foundation, and I think that’s a testament to the values that we try to instill in our players and in our family.”

Smith earned the respect from his former players, including former Kentucky standouts Jeff Shepperd and Cameron Mills, who visited with Smith prior to a ceremony at Rupp Arena last December. Smith also has a deep appreciation for the Kentucky program.

“Respecting each other and respecting the tradition that Kentucky has for their basketball program,” he said. “It’s the No. 1 basketball program in the history of college basketball, so that’s why it’s such a thrill, an honor to be a part of the legacy of Kentucky by having your banner raised in Rupp Arena.”

Like many in his profession, Smith wishes he had compiled a better record and won more games, especially the close ones.

“But it’s a process,” he said. “We want to finish this journey and then we’ll make a decision about retiring.”

That decision came sooner, rather than later, and history will never forget Smith’s impact as a college coach, especially at Kentucky.