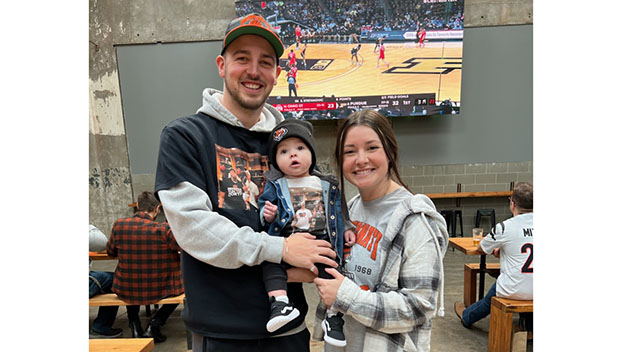 Zack Hill is the new jumps coach for the Lincoln County High School track team. He currently resides in Nicholasville with his wife Alex and their 7-month-old daughter Leighton. - Photo submitted

Coach Hill is a 2011 graduate of LCHS where he placed second in high jump at state his junior and senior year. He went on to represent LCHS at EKU where he placed 2nd in the OVC conference championship for indoor and outdoor high jump with a PR of 6’9”.

Hill still holds the high jump record at LCHS at an impressive 6’7”. He also played basketball as a Patriot and is in the 1,000 point club.

Coach Hill said, “I am excited to have the opportunity to coach at the place that started my athletic career. I learned teamwork, discipline and most of all integrity at LCHS and I plan to integrate what I learned not only there but at EKU into our athletes.”

Coach Hill currently resides in Nicholasville with his wife Alex and their 7-month-old daughter Leighton. He hopes to eventually move back to Lincoln County, but for now he says he’s just excited to be back on his home field doing what he loves.

Grady carries load for shorthanded Wildcats in victory over…