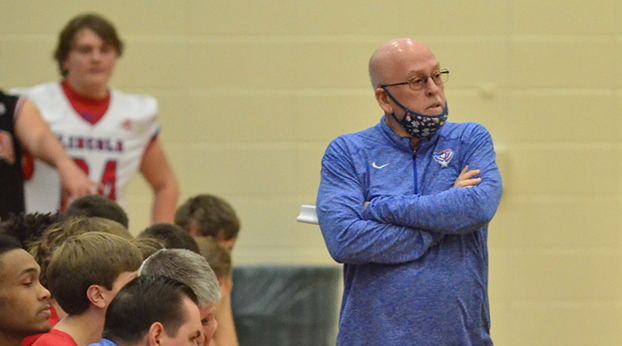 There’s no way to account for chemistry and culture on a stat sheet, but if there were, the Lincoln County boys would surely rank among the leaders in both areas.

In fact, you’d have to get up pretty early in the morning to outdo the Patriots in either category.

Many of Lincoln’s players begin working on building a better basketball team every morning before breakfast in what coach Jeff Jackson says is an extremely close team.

Jackson said the bond his team has is one of its greatest assets as the Patriots try to put themselves in position to contend for district and regional championships.

“We’ve been fortunate, very blessed that we get a chance to coach the kids that we have,” Jackson said.

Lincoln took a 23-6 record into its final regular-season games Tuesday at Lexington Catholic and Friday against Casey County and is ranked No. 2 in the 12th Region in the KHSAA RPI ratings.

The Patriots went 7-1 against their 45th District opponents and will be either the No. 1 or 2 seed in the 45th District Tournament next week at Danville. (Their seeding wasn’t determined until after press time.)

A talented team led entirely by juniors and seniors will be trying to extend Lincoln’s string of three consecutive district championships and to win the 12th Region for the first time since 2019. And their work starts anew every school day morning.

Jackson said many of the players meet up in the locker room before school starts and go to breakfast as a team before heading off to their classes.

“We talk about a culture of how we want our kids to act on and off the floor, in the classroom, in the locker room,” Jackson said. “There’s a sign on that door that says, ‘We walk on this floor together,’ and they meet here every morning, the older kids who can drive to school and most of the younger ones.

“It’s a good thing. It benefits our program so much because they care enough about all those things.”

Lincoln opened the season with nine straight wins and took a six-game winning streak into Tuesday’s game. The Patriots were 10-1 since a Jan. 14 loss at Boyle County.

Jackson said the Patriots’ chemistry has been good since the season started, and even before.

“They like each other and hang out together and do a lot of things together,” he said. “They’re fun to coach. I get after them sometimes, but they know I love them and I want them to do well and be successful and have an opportunity to be a good team.”

He said that chemistry wasn’t upset in the least by the addition of two transfers. Evan Smith, who played at Lincoln as a freshman, returned as a fifth-year senior under Senate Bill 128 after three years at Southwestern; and sophomore Will Bishop came from Rockcastle County, though he played in only seven games before a knee injury ended his season.

“They welcomed them with open arms,” Jackson said. “Our kids get along, and that comes back to your leadership from those guys.”

As is so often the case, Lincoln’s calling card is its defense. Through last weekend’s games, the Patriots ranked fifth in the state in scoring defense with 48.1 points allowed per game.

“We’ve gotten better defensively, and we’ve done a better job rebounding,” Jackson said. “We’ve got … to try to fine-tune some things offensively and we’ve got to continue to get better on the defensive end and continue to rebound.”

Lincoln also benefits from balanced scoring and the possibility that any of several players can lead the offense, which averages 61.0 points.
Alcorn led the Patriots through last weekend’s games with 13.4 points per game, followed by Ralston at 12.6, Jaxon Smith at 11.8 and Evan Smith at 11.4.

Jackson said he has been pleased with the way the Patriots have worked as one unit this season.

“They work hard together,” he said. “We go through some ups and downs, but you learn from it and grow.”