Lady Pats look to get on a roll for postseason 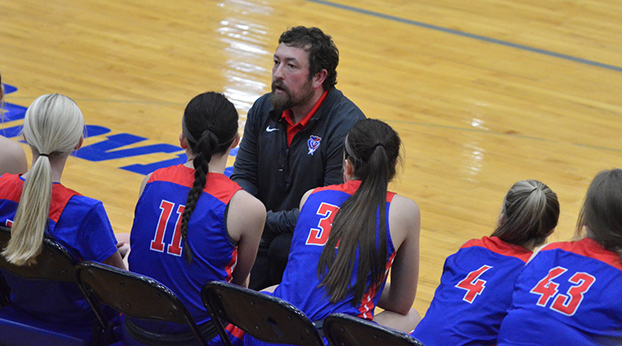 Coach James Jackson talks to his Lady Patriots during a timeout. - Photo by Mike Marsee

The Lincoln County girls are looking for a little momentum.

There have been times, particularly in the second half of the season, when the Lady Patriots have shown signs of improvement, but those times never seem to last very long.

Now as the postseason approaches, interim coach James Jackson said he’d like to see them get on a roll.

It’s a big ask for a young team in a program that has been through one transition after another, but Jackson feels it’s within the Lady Patriots’ reach.

“There are times where I thought we would have cut the corner, there are times where we were close in games … and we just have to get over that hump,” Jackson said. “Are we close? Yes. Now we’ve got to take that next step forward … and try to keep it rolling.”

Lincoln took a 9-19 record into its final regular-season games Tuesday against Barbourville and Friday against Casey County and is headed toward a third consecutive losing season under three different coaches.

The Lady Patriots will enter next week’s 45th District Tournament at Danville as the No. 4 seed in a five-team field after going 2-6 in district play.

They will play a first-round game against Boyle County, which they swept during the regular season.

“You see it all the time where teams may not have a great record or they’ve struggled through the regular season, and they get hot and healthy at the right time and they get on a roll,” Jackson said.

Lincoln hasn’t exactly been on a roll — its loss to Wayne County on Monday was its ninth defeat in 10 games — but it has shown clear signs of improvement, even in some of those losses.

Ten days after losing to Danville Christian by 17 points, the Lady Patriots played them to within four points in the rematch. Four days after that, they lost by only five points to Berea, one of the top-rated teams in the 11th Region.

On Feb. 7, there was a 17-point win over Boyle, which Lincoln had beaten by only three in January, followed the next day by a one-point loss to West Jessamine. That was followed by a 13-point loss to No. 1 seed Danville, which had beaten the Lady Patriots by 28 in January.

Jackson said the Lady Patriots’ biggest improvement has been on defense, while offensive success has come more slowly.

“Right now it’s the defensive focus and the execution of the game plan,” he said. “That takes time to develop, and that’s very similar to shots falling with new offenses. You have to find the rhythm and work on those shots every day to feel that rhythm in a game and do it at game speed, and I’m hoping that domino falls next.”

He said both offense and defense will have to work well to give Lincoln a shot at its first postseason win in three years?

Jackson, who was hired as interim coach in July, said he is most gratified by the way the Lady Patriots have worked to improve during a season when things haven’t often gone their way.

“They’re continuing to buy in, stick together and fight through and not worry about the record, but try to continue to find ways to build it, and it’s starting to pay off,” he said.

Lincoln has only one senior, guard Ally Lynn, on its roster. She starts alongside two juniors, Chloe Ralston and Emily Estes, and two freshmen, Alexia Baldock and Taylen Ralston.

Estes is the team’s leading rebounder with 5.6 boards per game.

Jackson said leaders also are starting to emerge to fill a void.

“Chloe is getting better, and so is Emily, and Alexia is starting to get more comfortable being assertive and being a point guard. That’s tough to do as a freshman, but I haven’t really given her a choice,” he said.

He also said the team is growing closer in each practice and game.

“I’m never satisfied, but they’re getting better every day and I commend them for that, but I want to keep seeing them go forward,” Jackson said.