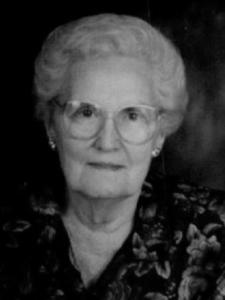 Flossie Mae Duvall Smith, 98, of Stanford, Kentucky passed away at her home on February 11, 2022.
She was born in Preachersville, KY on October 14th, 1923 to Eugene and Pearlie Mae Hurst Duvall.
Flossie graduated from Lancaster High School in 1943. She was a “Rosie the Riveter” during World War II in Connersville, Indiana where she did assembly work on airplane wings. Later she began working for Cowden’s Manufacturing where she retired after 34 years.
Frank Smith, “the most handsome man she had ever known”, became her husband on January 11, 1946. They were married for 57 years. Together, they were charter members of Willow Grove Baptist Church where Flossie served as the church clerk for 43 years. She was also a current member of the TEL Sunday School class.
Flossie enjoyed quilting, sewing, cooking, reading, her flowers, yard sales, penpals, and genealogy. She loved to spend time with her family, especially her grandchildren and great-grandchildren who lovingly called her “Mernie”.
She is survived by two daughters, Ann Long and Patsy Thompson (Johnny) of Stanford; three granddaughters, Stephanie Nash (Laurent) and Laura Hamm (Keith) of Stanford and Kisha Buis (PJ) of Lancaster; four great-grandchildren, Mason and Nolan Hamm, Hollie Nash of Stanford and Brantley Buis of Lancaster.
In addition to her parents, she was preceded in death by her husband, Frank Smith; two brothers, William and Jimmy Duvall; and a son-in-law, Mike Long.
Visitation has been scheduled for Wednesday, February 16, 2022 from 5:00 p.m. to 8:00 p.m. at Willow Grove Baptist Church in Danville, KY. Funeral service will be held on Thursday, February 17, 2022 at 1:00 p.m. at Willow Grove Baptist with Bro. Johnny Thompson officiating. Burial will follow at Danville Memorial Gardens.
Active Pallbearers are Laurent Nash, Keith Hamm, PJ Buis, Mason Hamm, Nolan Hamm, Brantley Buis and Hollie Nash.
Memorials in lieu of flowers are suggested to Willow Grove Baptist Church.