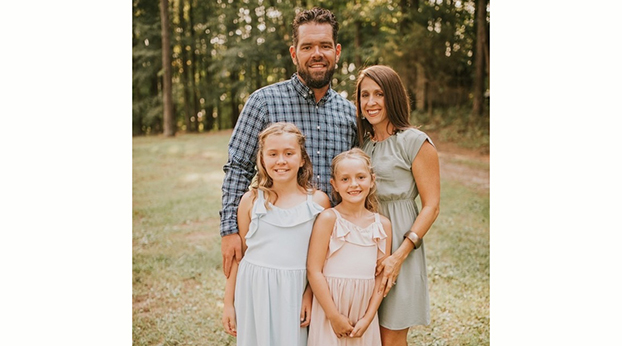 Josh Jaggers is the new Lincoln County High School football coach. He is pictured here his wife Megan, and their two daughters.

Josh Jaggers, a former Danville and Lincoln County player, and the son of one of Lincoln County’s most successful coaches, has been named the new football coach at Lincoln.

Jaggers’ hiring was announced Tuesday in a news release from the school district.

Jaggers, 40, spent eight of the past 10 seasons as head coach at LaRue County and has 17 years of high school coaching experience. He was 40-50 at LaRue, and his 2018 team reached the Class 3A semifinals.

Jaggers played for Lincoln in 1996, the last of the six seasons that his father Marty coached the Patriots.

“Life is about taking opportunities, and the opportunity to return to the place where I grew up on the sidelines to coach was an opportunity I could not pass up,” Jaggers said in the news release.

Lincoln principal Michael Godbey said Jaggers stood out among those applying for a job that drew considerable interest.

“We were blown away by the interest in this job. We took our time with this search, and evaluated the 15 applicants we had for the position,” Godbey said in the release. “Josh blew us away with his vision for the program on and off the field. He understands the value of a strong feeder system and has a great track record of helping his players further their career after high school. He will be a great addition as a teacher, coach and community member!”

Jaggers began his coaching career in 2005 at North Hardin. He was an assistant coach on the 2006 Mercer County team coached by his father that won the Class 2A championship and was an assistant at LaRue from 2008-11.

He coached at LaRue from 2012-14 and 2017-21, spending two years as an assistant at North Hardin between those stints.

Jaggers played for Danville from 1997-99, where he was part of a Class 2A runner-up team in 1998 and a Mr. Football finalist and the Kentucky Football Coaches Association player of the year in 1999.

After graduating from Danville in 2000, he began his collegiate playing career at Kentucky and finished it at Campbellsville, where he was an all-Mid South Conference first-team selection in 2004.

Jaggers is the 12th football coach in Lincoln’s 48-year history. He replaces Spencer Crutchfield, who resigned in December to take the same job at Garrard County.