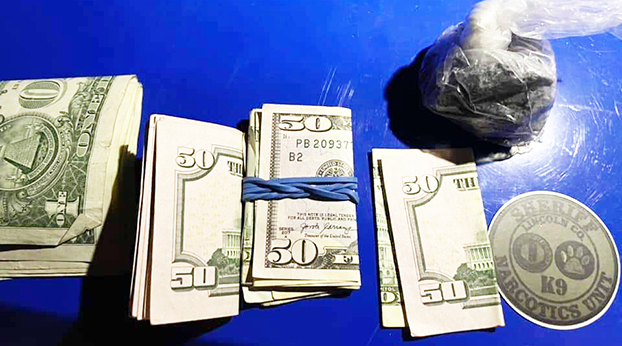 Deputies arrested a woman after finding over an ounce of 'black tar' heroin during a traffic stop earlier this month. - Photo courtesy of Lincoln County Sheriff’s Office

STANFORD – A woman was arrested on drug-related charges after deputies allegedly found her in possession of “black tar” heroin.

According to the Lincoln County Sheriff’s Office, deputies received a call on Jan. 5 in regards to a 1998 silver Toyota Camry operating in a careless manner on U.S. 27 south.

Deputy ERIC Davidson conducted a traffic stop at about 8:51 p.m. and observed the driver, 62-year-old Lynthia Dowdy, of Somerset, “leaned over in the vehicle,” according to the arrest citation.

Dowdy consented to a search of the vehicle and her person.

“When asked if she had anything in her pockets, Davidson observed a baggy hanging from within the pocket,” the arrest citation states. “She stated that it was heroin.”

Dowdy handed the heroin to Davidson.

K9 Sgt. Michael Mullins arrived on scene and examined the substance which he stated was black in color and “appeared to be ‘black tar’ heroin.

‘Black tar’ heroin is the result of crude processing methods that leave behind impurities and makes the substance “sticky like roofing tar” or “hard like coal,” according to the National Institute on Drug Abuse.

“Also in the vehicle was cash in various denominations, some had rubber bands around them,” the arrest citation states.

Dowdy was advised of her Miranda rights but “did not want to talk,” according to deputies.

She was placed under arrest by K9 Sgt. Michael Mullins and lodged in the Pulaski County Detention Center on charges of careless driving; rear license not illuminated; license to be in possession and trafficking in a controlled substance (heroin).