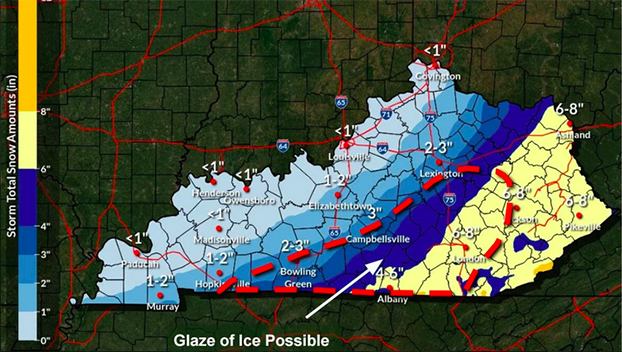 Parts of southern and central Kentucky could see some significant snowfall this weekend, as a Winter Storm Watch has been issued, bringing four to eight inches of snow.

The National Weather Service says although most of the state could see some light snow early this weekend, the main event is expected to take place late Saturday night through Sunday night with accumulation south and east of a storm line from near Bowling Green, through Campbellsville, Lexington and Maysville.

“This is going to be a heavy wet snow,” said Mike Kochasic with the NWS Louisville office.  “Possibly mixed at times with sleet, maybe even some freezing rain at times.”

He noted the heavy wet snow could make it hard to shovel for some people, and could possibly cause some power outages, due to the weight of the snow.

Kochasic points out, “Our confidence is low in this event. There are several different tracks and solutions we have seen in the model data, and they’re saying different things. Although the confidence is low, it is increasing that there will be some snow, especially in spots where the Winter Storm Watch will be in effect, Saturday night through Sunday night.”

He said it could end up like the last winter system a week ago, “Where it kind of wobbled a bit and some folks got more snow than they were expecting, the same potential exists here. Depending on the track that this system takes, we could see different snow for different folks there.”

Travel on Sunday morning could be affected.

“The roads could be icy in some spots, with a glaze of ice, mixed precipitation and sleet, especially in larger amounts could cause some hazardous travel, and of course the snow,” Kochasic said.  “Temperatures are going to be in the low to mid 30s for highs, both Saturday and Sunday. They will fall into the low and mid 20s overnight, Saturday night and Sunday night. Any melting that might occur during the day, could potentially cause some black ice at night.”