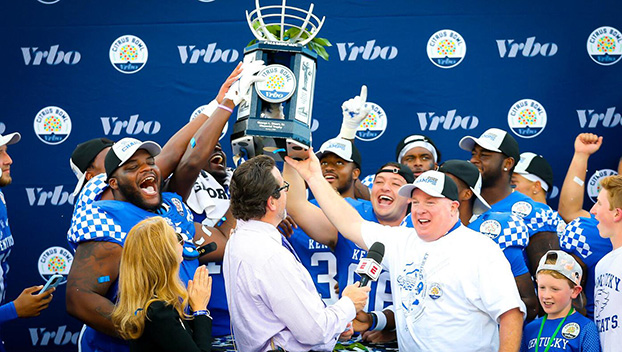 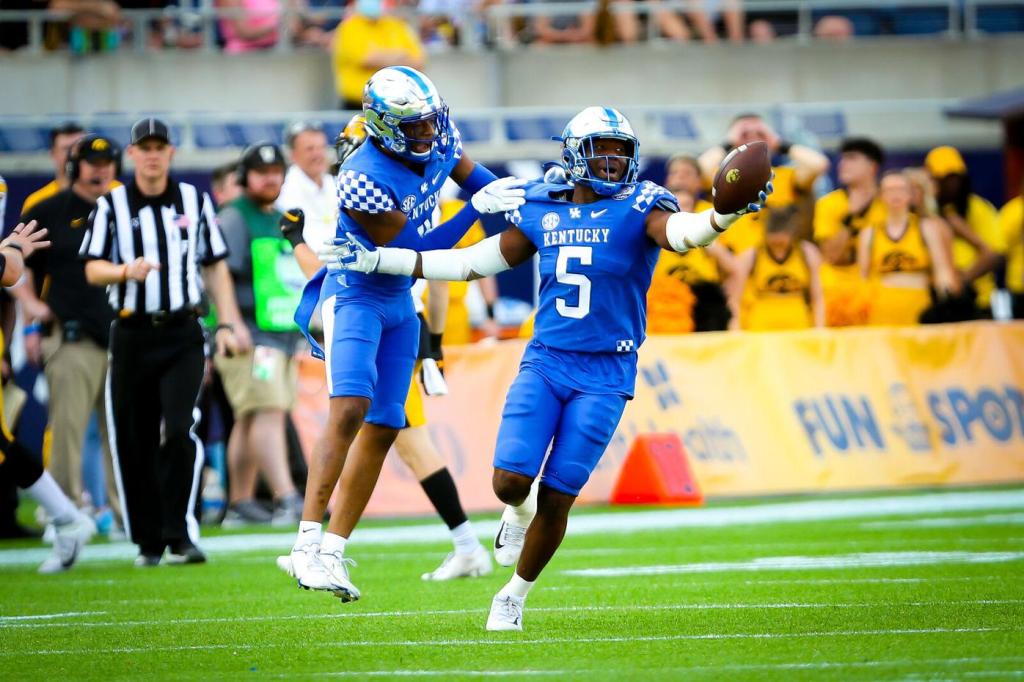 Kentucky’s DeAndre Square celebrates a late interception to seal the Cats’ win over Iowa in the Citrus Bowl. – Kentucky Today

ORLANDO, Fla. (KT) — Kentucky’s return to the Citrus Bowl turned from sour to sweet in a matter of two minutes Saturday.

The Wildcats, making their second appearance in four years, saved their best for last, scoring the go-ahead touchdown with less than a minute remaining and sealing the deal with 48 seconds left on an interception to hold on and defeat Iowa 20-17 in the Citrus Bowl at Camping World Stadium.

“We knew it would be a 60-minute football game and again, it was,” Kentucky coach Mark Stoops said. “Our team is used to playing a lot of close games, tough games, against quality opponents, and that was the case today.”

Kentucky (10-3) notched its fourth consecutive victory to close out a 10-win season for just the third since the 1950 season. Two of those double-digit win campaigns have come under the direction of Stoops, whose team has developed a knack for winning close games in the postseason.

The Wildcats have won their past four postseason games by seven points or less, including Saturday’s squeaker over the Hawkeyes.

The team’s recipe for success, Stoops said, is a result of his team’s toughness.

“I think it comes down to our players caring about each other and having a toughness and having a resiliency about them,” he said. “You know, respecting the game. We talked about playing the game with honor, and they do that. These players do. This is a player-led team.”

Much like its 27-24 triumph over Penn State in its first postseason visit to Orlando four years ago, Kentucky made heroic plays down the stretch to hold off the Hawkeyes, who rallied from a 13-3 halftime deficit and led 17-13 late in the fourth quarter.

Stoops wasn’t surprised by Iowa’s two touchdowns in the second half.

After Kentucky’s defense forced a three-and-out, Kentucky quarterback Will Levis connected on a 52-yard strike to teammate Wan’Dale Robinson, who made several jaw-dropping moves past two defenders, that put the Wildcats on the 1. After a false start, Chris Rodriguez scored on a 6-yard run, breaking a tackle in the backfield and barreling into the end zone, to set the final margin with 1:54 remaining.

When it came down to crunch time, Robinson just relied on his natural ability.

“I don’t really know how to explain it,” he said. “It is just more of instincts. You just go out there and do it. I can’t really tell you how to do it or what to do. It is just God-given I guess.”

Iowa coach Kent Ferentz has seen it before from Robinson when he played at Nebraska.

“He’s just a really explosive and dynamic football player,” Ferentz said. “He ended up being a factor on the back end. He was good when we faced him last time, and he’s probably better now.”

The two-minute scoring drill finally came through for Kentucky, which had struggled to get into a rhythm with quick scoring strikes at crunch time.

“When it mattered the most, we made plays at the end of the day.”

Robinson, Rodriguez and Levis accounted for a majority of Kentucky’s offense, with Robinson paving the way with 10 catches for 170 yards. Rodriguez rushed for 107 yards on 20 carries and scored two touchdowns (one rushing one receiving), while Levis threw for 233 yards and a TD.

Kentucky’s patched-up defensive unit, playing without starters Josh Paschal and J.J. Weaver, collected a pair of interceptions and slowed down an Iowa offense that was without running back Tyler Goodson, who opted not to play.

Senior linebacker DeAndre Square, playing hurt, capped the comeback with an interception for the final margin. The Cats, ranked 22nd going into the bowl game, finished the season 10-3.

Kentucky built a 13-3 lead in the first half on the strength of a scoring drive on its first possession but later having to settle for two field goals after stalling inside the 10. Matt Ruffalo booted the field goals of 21 and 27 yards.

Iowa had the second-half momentum until Kentucky’s final drive that included a key 17-yard completion from Robinson, who took a vicious hit, on the third-and-10 play. Two plays later he set sail on the 52-yard catch.