WKU coming to Rupp to face Cats as replacement for Louisville 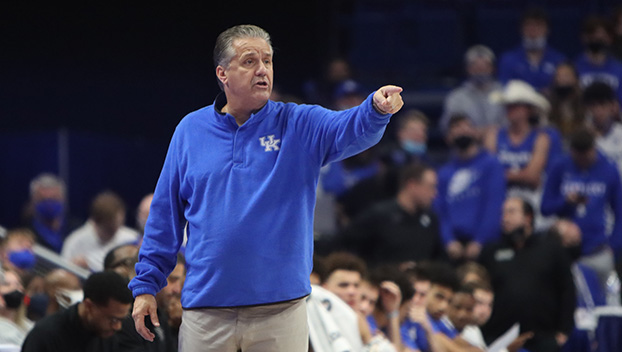 UK coach John Calipari and his Wildcats will host Western Kentucky University Wednesday. WKU replaces Louisville on the schedule after U of L has reported numerous COVID cases on the team. - Photo by Jeff Moreland

Western Kentucky will be coming to Rupp Arena on Wednesday to face Kentucky.

The Hilltoppers, fresh off an 82-72 victory over Louisville on Saturday, will be replacing the Cardinals on the schedule. The game will be shown on ESPN at 6 p.m. and give WKU national exposure for the second game in a row.

UK’s game vs. Louisville was postponed Monday morning due to positive COVID-19 results within the UofL program. Officials from Kentucky and Louisville will monitor opportunities in which the teams can reschedule the annual rivalry game.

With an open date, Kentucky and Western Kentucky will meet for the first time since the 2012 NCAA Tournament. UK Athletics is working on a charitable component from the game that will provide support for those who were affected by the tornadoes.

“We have now dealt with COVID-related issues the last two scheduled games. I am very appreciative of the University of North Carolina and Western Kentucky University for working with us quickly to complete our schedule,” said Mitch Barnhart, UK Director of Athletics. “I know our fans were looking forward to the game with our intrastate rival. In lieu of that game, Western Kentucky and the University of Kentucky will come together to provide some relief for our state as we work through the tragedy of the last couple of weeks in Western Kentucky.”

Tickets and parking permits for the original Wednesday game vs. Louisville will now be valid for the replacement game vs. Western Kentucky. Ticket holders do not need to take further action.

“We really appreciate the cooperation from Mitch Barnhart and Coach Calipari in working with us so quickly in scheduling this game,” said WKU Director of Athletics Todd Stewart.  “I know our fans will be excited about playing Kentucky, and our program always looks for challenging opportunities on a national stage.  Most importantly, playing this game will result in providing relief to those who have been impacted the most from the devastating tornadoes in our region.”

UK coach John Calpari said he was “thrilled” to put the game against the Hilltoppers together so quickly.

“We were all disappointed to learn we won’t be able to play Louisville on Wednesday, but I am thrilled we were able to come together quickly and put this game together for everyone in this state,” Calipari said. “I want to thank Western Kentucky for working with us on short notice. Not only will this be a great test for our team, but we will be able to provide aid to the Western Kentucky region and lift the spirits of some special people who really need it.”

The Kentucky United Toy Drive, which was originally scheduled for the Louisville game, is still scheduled for Wednesday’s game vs. WKU. New, unwrapped toys in original packaging or $25 VISA or Mastercard gift cards will be collected and donated to families in Western Kentucky in need following the tragic tornadoes last week. The UK Police Department is working with UK Athletics on collection and distribution of the donated items.

UK will accept donations at all entrances of Rupp Arena during the game. Free admission with a donation cannot be offered due to limited availability.

The toy donation is in conjunction with the “Kentucky United for Tornado Relief” telethon that UK Athletics, WLEX-TV and JMI Sports hosted earlier this week. With donations still being accepted online, nearly $4.5 million had been raised through Kentucky United. All proceeds are going directly to the American Red Cross to benefit Western Kentucky victims.

Donations to Kentucky United can continue to be made at redcross.org/donate/cm/wlextv-pub.html/ (site will be active through the end of the month) or by mailing a check to: American Red Cross, Attn: Kentucky Tornadoes, 1450 Newtown Pike, Lexington, KY 40511.

Western Kentucky is 8-4 this season and has won three straight games after defeating the Cardinals on Saturday in Bowling Green, Kentucky.

The Hilltoppers have four players averaging double figures, led by senior forward Jairus Hamilton with 16.5 points and 6.5 rebounds per game. Sophomore guard Davion McKnight is adding 14.1 points, 6.6 rebounds and 6.4 assists per contest. In the win vs. the Cardinals on Saturday, graduate guard Camron Justice scored 25 points.

WKU’s previously scheduled road trip to Austin Peay has been mutually agreed to move back to the 2022-23 season.

“We want to extend our appreciation to Coach Calipari and Kentucky for their willingness to play this game,” WKU head coach Rick Stansbury said. “This is a great opportunity to raise awareness about what our state is going through right now and continue to build support for those in western Kentucky affected by the recent tornadoes, including the people of Bowling Green. I know Cal and Kentucky didn’t have to do this, but it speaks volumes about their willingness to help the state of Kentucky.”

Wednesday’s matchup will mark just the seventh all-time meeting between the two schools. UK leads the series 4-2, but the series is tied 1-1 in Lexington. The Wildcats won the last matchup, 81-66, in Louisville in Kentucky’s first game of the 2012 NCAA Tournament run that culminated in the school’s eighth national championship. The last time UK and WKU met in Rupp Arena, the Hilltoppers knocked off the Wildcats 64-52 in the 2001-02 season opener.