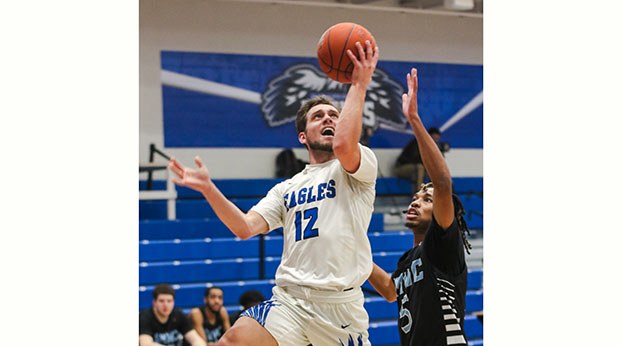 In the opening half, things started well for the hosts as five different players dented the scoreboard early to give ALC the quick lead (20-13) with 12:33 remaining. Sparked by the 15-point, 6 assist effort from senior point guard Noah Young, the Eagles would roar out to a 44-26 advantage by intermission. They were not finished yet.

In the second half, the Caney Creek crew would take their play to an even higher level as junior big men Will Philpot and Colyn Sturgill, along with sophomores Ben Soumahoro and Noah Caudill would lead the pack. The home club could do no wrong as they raced out of the locker room on a 25-15 spurt, and the blue and white would lead 69-41 at the midway point. Not surprisingly, everyone in uniform contributed in some fashion while leading the undefeated Eagles. The Pippa Passes boys would maintain a massive advantage the remainder of the way, as they chalked up the impressive victory in the win column.

For the victors (13-0; 6-0 RSC), five players would reach double digits. Young would lead the way in fine fashion with 19 points on 8-11 FG. He also handed off 9 assists., grabbed 4 rebounds, and recorded 3 steals. He was followed in scoring by forward Philpot (5-7 FG), guard Soumahoro (6-10 FG), and forward Caudill, each with 13 points. Sturgill (5-9 FG) added 11 points. Philpot led the way with 9 rebounds while the big center Sturgill swatted 3 shots.

The Eagles return to action this Saturday, December 18th, when they travel to Morehead to face the NCAA DI Morehead State University Eagles in an exhibition match. Tipoff is set on 4:00 pm. They will close out the 2021 portion of the season on the road at Asbury University on December 29th, in a regular season non-conference matchup at 7:00pm. This will be followed by the final exhibition match of the season, scheduled for December 31st (New Year’s Eve), against NCAA DI Eastern Kentucky University Colonials, at 3:00pm.