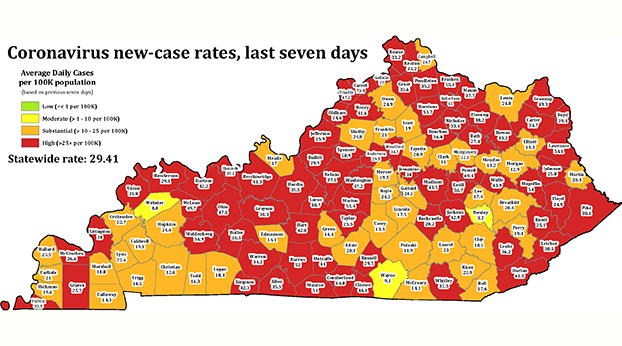 Kentucky’s coronavirus metrics took another jump Tuesday, with new cases and the share of Kentuckians testing positive up, and the fallout from that reflected in hospitalizations and deaths.

The state reported 2,558 new cases, bringing its seven-day rolling average to 1,469 per day. Tuesday’s number was likely inflated due to delays in testing and reporting over the holiday, but that said, it is the highest one-day new-case number since Oct. 7. Of today’s new cases, 25% are in people 18 and younger.

The share of Kentuckians testing positive in the past seven days went up again, to 8.31%, maintaining a steeper rate of climb that began last week.

Hospital numbers also jumped. Kentucky hospitals reported 930 Covid-19 patients, an increase of 71 from Monday. That was the largest one-day rise since Sept. 8; both days followed holiday weekends in which hospital admissions may have been delayed. (Hospital numbers are recorded at midnight.)

The Hopkinsville Art Guild memorialized seven people who have died from Covid-19 with portraits, each of them with a connection to Western Kentucky and most of them from the Hopkinsville area, Jennifer P. Brown reports for the Hoptown Chronicle.

Van Tatenhove “said that the question before him was a narrow one: whether or not Biden had the authority to impose vaccines on the employees of federal contractors and subcontractors,” Horn wrote, quoting the judge: “In all likelihood, the answer to that question is no.”

An independent advisory committee to the U.S. Food and Drug Administration narrowly endorsed the first antiviral pill developed by Merck & Co. for Covid-19, called molnupiravir. The vote was 13-10, with some members voicing concerns over the drug’s potential impact on people of childbearing age and concerns over whether the drug could drive mutations of the virus, The Hill reports.

Merick said the drug, which is administered as a five-day treatment, showed a 30% reduction in hospitalizations and deaths, based on data from 1,433 patients, The Hill reports.