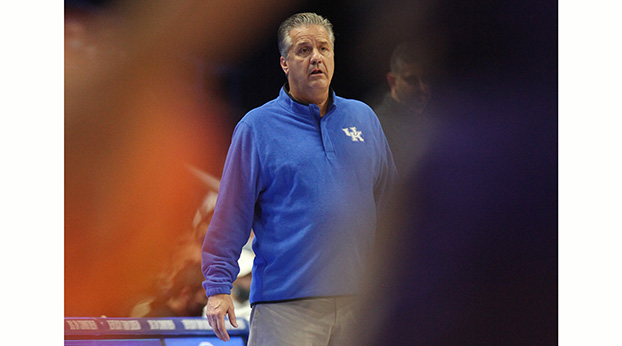 Kentucky coach John Calipari instructs his team in the Wildcats’ first exhibition game of the season against Kentucky Wesleyan. - Photo by Jeff Moreland

John Calipari knows his team’s season opener against Duke in the Champions Classic is a big deal but is approaching the showdown as if it were just another game.

“We approach every game the same,” Calipari said. “You can’t make it any different. This will be the stage. All the stuff we’re saying is, look, our focus is on us. We’re going to play how we play. They’re going to play how they play. And either they’re more advanced than us or we’re a little more advanced than we think we are. But we’ll find out.”

Much like their coach, Kentucky’s players are taking the same approach into the contest, despite the larger-than-life stage that awaits the two programs at historic Madison Square Garden Tuesday night.

“I just feel like it’s like another game,” Kentucky junior Keion Brooks said. “We’re just going to go out there and treat it like any other game.”

Noted director Spike Lee is among those expected to be in attendance Tuesday night, but Brooks doesn’t expect Lee’s presence to be a distraction.

The two storied programs enter ranked in the Top 10 to open the season. The Blue Devils are ranked No. 9 in the Associated Press preseason Top 25. Kentucky is right behind Duke at No. 10, adding a little more hype to a rivalry that spans just 22 games, but the Blue Devils have dominated during the past decade. Duke has defeated the Wildcats in eight of the past 10 games between the two squads, including a 118-84 rout of the Wildcats two years ago at Bankers Life Arena in Indianapolis.

The contest will be Kentucky’s last regular-season game against Duke coach Mike Krzyzewski. who announced his retirement last summer. Krzyzewski enters his 42nd and last season as coach of the Blue Devils and will finish as the all-time winningest coach in men’s college basketball. Calipari hopes it won’t be his last game against the Hall of Fame coach.

“I’m hoping this isn’t the last time we play them, so don’t make any mistake about that. I hope we play them one more,” he said Tuesday.

Calipari said Krzyzewski has been a big influence not only for him, but for other college coaches.

“He’s made me a better coach,” Calipari said. “He’s kept me sharper. We did things those first five or six years that, you know, Duke started taking the same kind of guys and it became that competition back and forth. But I’ve never lost respect for what he’s been able to do over 40 years. Do you know how many times you have to change the way you coach and what you do? It doesn’t mean the principles, the pillars of your program change, but how you defend, how you play offensively, how you teach, what’s more important.”

The Kentucky coach also praised Krzyzewski for his longevity, especially at one institution.

“To do it over 40 years, incredible. At one place, incredible. Coach (Adolph) Rupp, you can say the same thing,” Calipari said. “How do you do it that long in one place and still have a level of that excellence that you have. And I’ll tell you what, he’s been great for all coaches.”

No matter the outcome in what could be his last game against Krzyzewski, Calipari said the opener will be beneficial and will help gauge his team’s progress.

“This is the games you learn about your team,” the Kentucky coach said.

Iowa Transfer CJ Fredrick returned to practice last weekend and Calipari is glad to have the transfer guard on the floor.

Fredrick had been battling an undisclosed leg injury during the preseason.