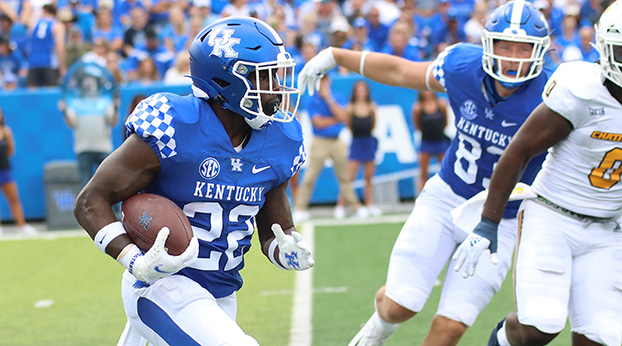 Kentucky running back Kavosiey Smoke (22) carries the ball for the Wildcats. - Photo by Jeff Moreland

A week off and a dose of rest came at the right time for Kentucky’s football team. It was much needed.

Coming off hard-fought victories over Florida and LSU, followed by a loss to top-ranked Georgia, a bye this week has given the Wildcats a chance to heal up both mentally and physically going into the final five weeks of the regular season.

The reboot begins on the day before Halloween against Mississippi State in Starkville, followed by league games against Tennessee and Vanderbilt, giving the Wildcats an opportunity to snatch up three more Southeastern Conference victories in what has already been a memorable start for the 15th-ranked Wildcats. Obviously, a Mike Leach coach team is a concern, but perhaps the team to watch is Tennessee, and that contest on the first weekend of November could very well determine the second-place finisher in the SEC East.

The Volunteers have been undergoing a change of identity under first-year Volunteers coach Josh Heupel, but Tennessee has been known to score points in bunches, just as it did against Missouri, torching the Tigers by putting up 62 points, followed by 45 points in a win over South Carolina a week later.

However, Kentucky coach Mark Stoops knows the Wildcats control their own destiny at this point and has a pulse on his team’s ability to bounce back, especially given the fact that it proved themselves worthy of being a contender in the SEC against the Gators and Tigers. From here on out, Stoops wants the Wildcats to use a one-week season approach during the final five weeks.

“Our team knows we have a good football team,” he said. “They know that we can compete and play better than we did (against Georgia). They have a strong belief system. … They know they belong and we have to regroup.”

Kentucky men’s basketball coach John Calipari also believes the Wildcats will recover successfully and helped Stoops bounce back quickly after the loss to the Bulldogs last weekend. Stoops was understandably down following the team’s first setback of the year and Calipari credited the Wildcats for their ability to compete in a hostile environment.

“I called him after (the) Georgia (game) and he was upset,” Calipari said. “He thought we could have played better. I said, ‘Mark, it was a rock fight. It was a rock fight. You’re not going to have execution. You’re trying to survive, and your kids never budged.’”

Now that Georgia is the rearview mirror, Stoops isn’t looking back but also knows the Wildcats can’t get ahead of themselves, given the success they’ve already enjoyed this year.

“We can’t get too far ahead of us on any given Saturday,” he said. “Crazy things happen … this is college football. It’s chaos at times and we have to concentrate on ourselves.”

It has indeed been crazy times, but it’s that time of the year when the movers and shakers separate themselves from the rest of the pack.