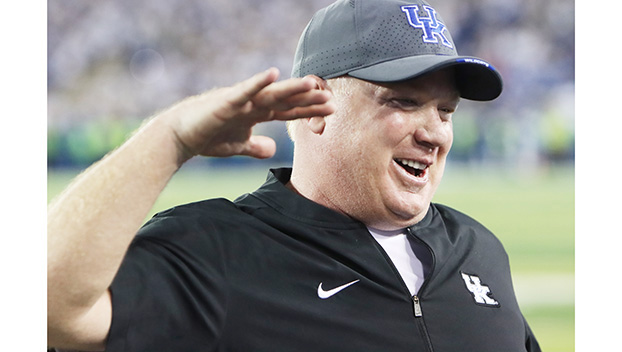 Kentucky coach Mark Stoops gives a high five in celebration of the Wildcats’ win over Florida. - Photo by Jeff Moreland

Mark Stoops has defeated Florida not once, but twice.

Three years removed after Stoops and the Wildcats broke a 31-game losing streak to the Gators with a 27-16 victory at the Swamp in Gainesville, Kentucky did it again, notching its first win over Florida in Lexington in 35 years, with a 20-13 triumph Saturday night at Kroger Field.

“It was a great, great team effort (and) it was beautiful in so many ways,” Stoops said afterward. “It just shows the character of this football team, the resiliency that they have, the toughness, and things like that aren’t easy. It hasn’t happened in a while and it’s not easy. Defensive performances back-to-back is as good of performances as we’ve had in a long time. … That’s a tough team to handle, they put a lot of stress on you in different ways. … you win games any way you can and that was a thing of beauty.”

It marked Kentucky’s first victory over a Top-10 opponent since a 31-28 triumph over Steve Spurrier’s South Carolina Gamecocks back in 2010. It was also a win that kept Wildcats perfect at 5-0 on the season and unbeaten in the Southeastern Conference at 3-0.

It took a stellar defensive effort from start to finish to fend off the Gators, who were denied a potential game-tying touchdown and point after in the closing minutes. Kentucky was flagged with a celebration penalty after Jacquez Jones broke up a pass in the end zone on fourth down, but at that point, it didn’t matter.

Kentucky defensive coordinator Brad White said the finish was “up there in the anxiety meter,” but credited his unit for staying poised under pressure. The Wildcats made eight straight stops on Florida’s last possession to put the finishing touches on the narrow win.

“What’s gratifying, is watching them play together, elevate and celebrate,” White said. “That’s what is gratifying to me, whether you’re winning by 100-0 or a ballgame that’s down to the last second. To watch these guys compete out there on the field, that’s what is so much fun. … it’s so much fun to coach. This group is dialed in and all they want to do is win for each other and win for the team.”

Those moments haven’t occurred in Lexington on a regular basis, especially during the past four decades.

For just the fourth time in the past 70 years, a Kentucky team opened the season with five consecutive victories, a feat that had occurred just three times since the 1984 season. It also gave Stoops home and away victories over Florida and Tennessee in his nine-year tenure as coach, a feat that was once considered impossible, long before Stoops arrived on the scene.

The long-time defensive coordinator was brought in to elevate the Kentucky defense and the giant leap the Wildcats have made defensively under Stoops was on display against the Gators. The Wildcats limited Florida, which compiled 439 yards in a 31-29 loss to No. 1 Alabama earlier this season, to 382 total yards, including 171 yards on the ground.

It was an off-night for the Kentucky offense — 224 total yards — but not a surprise, considering the reputation of the Gators’ defense under Todd Grantham. Although the Wildcats didn’t pile up the points on the Gators, Kentucky offensive coordinator Liam Coen was pleased with the outcome.

“Is that where we want to be as an offense? No,” Coen said. “But that’s a pretty darn good defense.”

In his first signature win as Kentucky’s quarterback, Will Levis said the rare win over the Gators was “one of those things that you dream about and a dream come true” and added the Wildcats served notice to the rest of the nation.

“We proved how hard-nosed and how good we can be that way, especially defensively,” he said. “The offense still has a lot to prove, but we definitely proved we can win big games like that.”

It was a moment Big Blue Nation has been wanting for decades and Stoops made sure the team’s fan base knew how much they were appreciated following the outcome.

“BBN, this is for you,” he said. “They really showed up in a big, big way and it had an impact on the game. They affected the football game in a very positive way.”

Although a monumental victory, Stoops doesn’t plan on putting his work ethic into cruise control, especially with games against LSU, Georgia, and Mississippi State looming during the next four weeks.

“For me, it’s back to work,” Stoops said. “I’ve got to practice what I preach to the team. We’ve got to take care of the things in front of us. We want to play in a lot of big games (and) we have a long way to go. I’m very excited and I’m very proud of this group, but we’ve got to go back and punch the clock (and get back to work).”

Keith Taylor is sports editor for Kentucky Today. Reach him at Keith.taylor@kentuckytoday.com or via Twitter at keithtaylor21