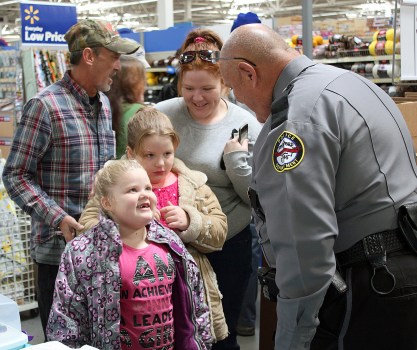 Stanford Police Detective Tim Morris brings a big smile to the face of seven-year-old McKayla Wethington during the local Shop with a Cop event. - Photo by Abigail Whitehouse 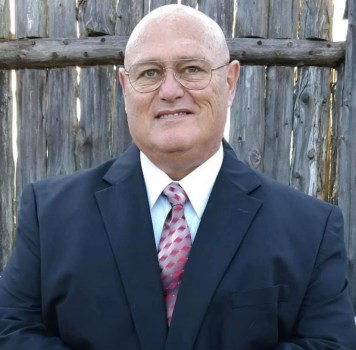 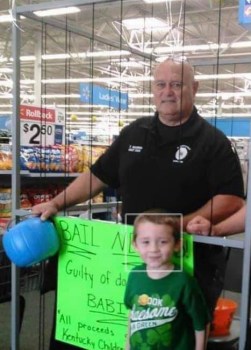 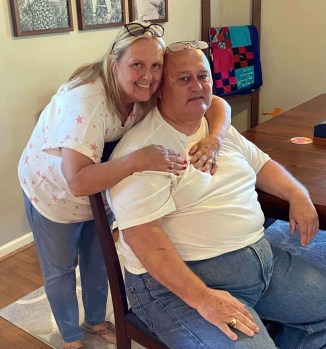 Rita and Tim Morris pose for a photo together. - Photo submitted 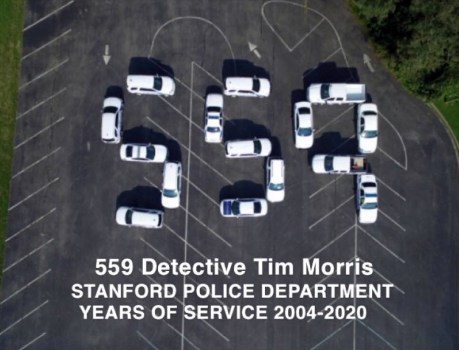 Tim Morris is remembered by his badge number '559.' - Photo courtesy of the Stanford Police Department

STANFORD – The Stanford community is mourning the loss of a former detective who recently passed away.

Tim’s wife, Rita, said the couple went to get tested for COVID after she was exposed to someone with the virus at work.

“He had had some other health problems. They were checking his heart and different things. He had an appointment scheduled for a neurologist. So I was like, he does not need this,” she said.

Both Rita and Tim tested positive for COVID-19, she said.

“I didn’t have a lot of the symptoms other than basically I lost my smell and taste. I had a cough and I had a headache. Tim, his symptoms were a lot worse. He was having issues with his respiratory and his breathing,” she said.

His condition worsened and Rita decided to take him to the hospital.

For the next month, Rita and family members tried hard to visit with Tim but could not see him in person due to COVID. After two weeks, the family was finally able to see Tim via FaceTime. Rita said the hospital provides tablets for patients to FaceTime loved ones, something she did not know about until later.

“I thought he looked really good. They had shaved him. That was the first time that he really looked better,” she said. “So I really thought, ‘hey, this is going to be OK.’”

Rita said Tim would “light up” whenever he got to FaceTime with his family.

Eventually, Tim’s oxygen levels dropped and his blood pressure increased, and he had to be intubated and taken to the Intensive Care Unit.

“I went that whole week and wasn’t able to FaceTime or anything because he was in ICU,” she said.

After expressing some concern about not seeing him, Tim’s doctor began to call Rita every day to let her know how he was doing and scheduled a few in-person visits.

Rita was at work when she received a phone call from the doctor saying Tim’s lungs had hardened and that he would probably only have a few days left to live. The following day, Tim’s oxygen levels fell and Rita received another phone call telling her to come be with him.

“…she said ‘it’s not good, he’s probably only got a few hours,’” Rita said. “I just took off over there and got there as soon as I could. I called his son, he had to come from Georgetown. My daughter left her work and came over. So I had my family with me. We had to FaceTime his oldest son because he’s in the military. He’s in the Army, and he was doing training for a job promotion. So he actually pulled over in a parking lot and was on FaceTime with us when his dad passed.”

Tim was with all of his family, Rita said.

“He went peacefully. He really did,” she said. After several long breaths, and even longer pauses between them,

Rita said she whispered a few words in Tim’s ear.

“Finally I leaned over to him and said ‘559 it’s time to go home and enjoy your retirement and see your mom and dad. That was it. A little tiny breath and that was it.”

“He loved his job,” she said. “There were so many people who came to the visitation who said ‘he was my hero. It just made my heart happy. He just left a big impression on this whole county. He would’ve been speechless to see how everybody reached out to us and how everybody came.”

A legacy of community service
Tim left a mark on the Lincoln County community, and on many law enforcement officers, including Stanford Police Chief Zach Middleton.

“I had the pleasure of working with Tim from the beginning of my career through his retirement in December,” Middleton said. “We worked many shifts, incidents and cases together.”

The two spent a lot of time together, Middleton said, and have been through a lot together, especially during the last five years when Tim served as detective.

“Tim leaves behind a legacy of being a dedicated public servant and a caring individual who had a heart for the community,” Middleton said. “He was one of a kind.”

Tim was a founding member and president of the local Fraternal Order of Police. In that role, he worked hard fundraising for the youth in Lincoln County by awarding scholarships and assisting in other programs.

He also spearheaded the Stanford Police Department’s annual Shop with a Cop fundraiser, which ensured hundreds of kids received Christmas presents each year.

Last year, when COVID-19 cancelled the in-person event, Tim and Rita shopped for and delivered presents to make sure no kids went without a Christmas.

“Tim was our friend and our brother and will be missed by many here within the department and the community,” Middleton said.

David Gambrel said Tim was like a brother to him. Tim served as a Mason alongside Gambrel. Gambrel said he conferred Tim’s Masonic rites.

“He had such a capacity for compassion,” he said. “If there was one word I would use to describe him it would be ‘caring.’ He cared.”

“I never, in the time I knew him, heard him say an unkind word about anyone,” he said. “We just don’t give police officers enough credit, we don’t appreciate the impossible job they have. He operated with integrity and compassion.”

Tim seemed to have magic with kids, Gambrel said.

Joe Gilliland, who was also a Mason and worked alongside Tim as a police officer echoed those same sentiments.

“He was very caring,” Gilliland said. “He wanted to serve. He wanted to do what was right. When he was on the street, he knew everybody, he spoke to everybody and everybody seemed to really respect and like him.”

Tim was a wonderful father and an asset to the community, Gilliland said.