Ky. National Guard cuts some training because of ‘funding shortage’ 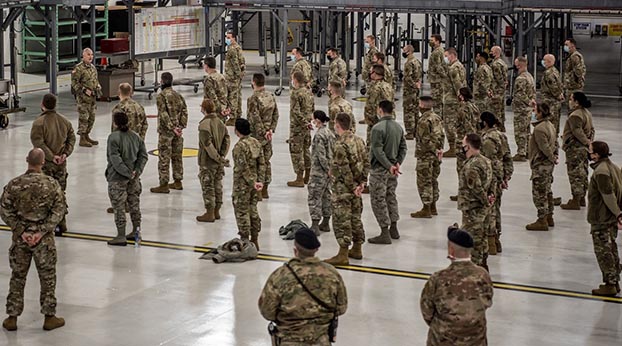 Kentucky National Guard is facing a financial shortage because of expenses from being called to the Jan. 6 insurrection in Washington, D.C. (Photo by Staff Sgt. Joshua Horton)

The Kentucky National Guard is scaling back some training activities this month, due in part to expenses incurred while deployed to the U.S. Capitol following the Jan. 6 insurrection.

“The effects of the funding shortage,” according to Martin, “is that we will do a reduced drill for the majority of the Guardsmen in Kentucky for August. That’s actually a national response as well. Most every state in the nation has the same posture with the reduction in training requirements for August, and some have already made the decision to go into September.”

He notes that in Kentucky, the Guard will wait until they see what money they have left after they get ready to deploy to the southwest border, as well as upcoming overseas deployments, before making a final decision on September training activity. The situation should clear up when the new federal fiscal year begins in October, he believes.

Martin says while Congress has approved money to reimburse the Guard for their time in Washington, D.C., “That doesn’t account for some additional shortfalls that we had previously planned for; some additional retention bonuses that we’ve had the opportunity pay out, as well as a reduction in funds that we were provided this year, to begin with, that we anticipated.”

When asked if some of the federal pandemic money can be used by the Guard, Martin replied, “I don’t think so. The federal and state are two separate entities. We can’t pay federal resources out of state funds.”

He urges every Kentucky Guardsman who has a question on their August training requirement to contact their Readiness NCO, “Because while it will affect many of our Guardsmen, it won’t affect every single one of them. We do have some units deploying who will be preparing for that deployment, and they will continue to conduct their drill and training as usual.”

Kentucky currently has around 8,000 Guardsmen statewide, 1,000 of which are in the Air Guard.

Martin adds, “Our strength numbers are looking better than many of our states, and certainly better than active-duty Army. Even with the uptick in our operational tempo, with deployments to our national Capitol, providing support to COVID with more than 100 Guardsmen on full-time providing support to vaccine centers and food bank distribution, helping with riot control and elections last year. We thought that might hurt us in retention and recruitment, but we’ve been able to keep up our numbers.”